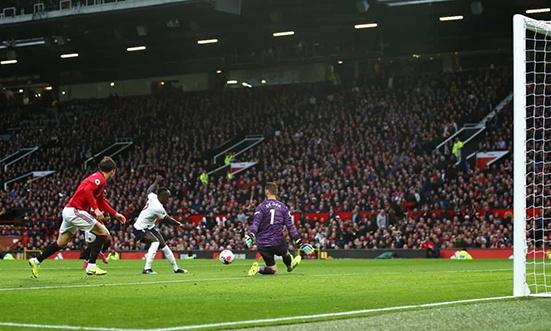 Jürgen Klopp railed at the VAR outcome over a “clear foul” in the buildup to Marcus Rashford’s goal as Liverpool surrendered their 100% record in a 1-1 draw at Manchester United on Sunday.

The result cut Liverpool’s lead over Manchester City at the top of the Premier League to six points. The draw prevented Klopp’s side from matching City’s record of 18 successive league wins and providing a welcome confidence boost for Ole Gunnar Solskjær’s side after a testing start to the season.

Klopp was left complaining about Martin Atkinson’s decision not to award a foul on Divock Origi by the defender Victor Lindelöf just before Rashford gave United the lead in the 36th minute.

The VAR official David Coote, who saw his decision to award a goal for Aston Villa’s Conor Hourihane against Brighton overturned by VAR the previous day, decided no foul had been committed.

“This is an issue we have to discuss,” said the Liverpool manager. “The process [allows] the ref to make the decision or not because they have VAR. The ref thinks: ‘Let it run – we have VAR.’ But then VAR says it can’t be overruled because it was not clear. How can he say it’s not a foul? I was 100% sure. I said, ‘Wow.’ I was not angry, I was surprised. I think everyone can agree it was a foul but with VAR it is not a clear foul. That is the situation.

“We didn’t lose but it was an obvious foul. There was clear contact and Divock Origi goes down. They carried on and counterattacked. Yes, there is contact, I’m sure they said that but it is not a ‘clear foul’. That doesn’t work. That’s just not how it should be.”

Solskjær took the opposing view when asked if it was an infringement. “No chance – we’re not playing basketball. It’s never a foul. I don’t think Keano [Roy Keane] would say that’s a foul. I thought the referee needs praising. It’s not often we do that. He let it be a derby game, it wasn’t like you couldn’t touch anyone.”

Sadio Mané looked to have equalised just before half-time but this time VAR disallowed the finish, with replays showing the forward clearly handled before scoring past David de Gea. Klopp had no problem with this decision and admitted he had been relieved to maintain their unbeaten start to the season.

“I didn’t see it back but it was probably handball,” he said of Mané’s disallowed goal. “We changed our formation and had these moments. Then we scored the goal [Adam Lallana’s late equaliser] and was in charge of the game. The stadium was silent and people probably thought Liverpool would score but we take the point and move on.”

Solskjær fielded a 3-4-1-2 formation that wrested the initiative from Liverpool though Klopp claimed United were set up to defend first.

“We were good enough for a point,” he said. “We gave Man United an opportunity to play the way they wanted to play with five at the back. They were hard-working. Our orientation wasn’t good enough. We felt under pressure when we weren’t and could have turned inside at some opportunities.

“We always play against the wall. We need to do better but it is how it is. I don’t think Man Utd can play like this if the other team doesn’t have the ball as much. We play very often against a team like this. Maybe we can do better. One point is completely fine.”

Solskjær disagreed again. “We set the team up to attack and be aggressive and create chances and we did that,” he said. “It depends on what you call a counterattack. We’re better when we attack quickly, no dilly-dallying, [it] doesn’t have to be a counterattack.

“I spoke about it before the game – take more risks, be braver – it’s the right type of football, and being more direct helped us.”

This was, though, a 21st time in the last 24 outings United had scored only once. “Getting the second goal [is what we have to do],” said Solskjær. “We had two or three great opportunities to score, we soaked up the pressure well but didn’t create enough ourselves and that’s the next level. We’re not excited about getting a point against a good team.”