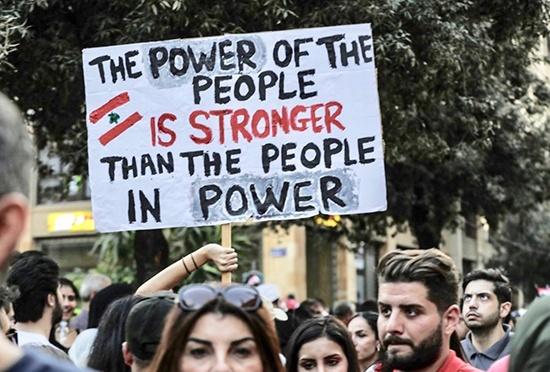 Prime minister’s ultimatum on reform package seen by many as desperate attempt by political elite to save their seats.

Lebanon’s main parties agreed to a reform package proposed by Prime Minister Saad Hariri, who had given his coalition partners until Monday to back it, a senior official said.

The country’s top leaders replied on Sunday to Hariri’s ultimatum, agreeing to scrap new taxes and privatise major companies, among other measures, a cabinet official told AFP on condition of anonymity.

Officials also told Reuters that the agreement had been reached as hundreds of thousands of protesters flooded the streets for a fourth day in the biggest show of dissent against the establishment in decades.

A sea of people, some waving Lebanese flags, have called for revolution in protests that resembled the 2011 Arab revolts that toppled four presidents.

But many Lebanese were unimpressed with the news.

“Cancelling taxes is not enough. We want corruption to be held to account. We want our money back,” said Hassan, a tradesman.

Protestor Rana Medawar agreed. “They have been lying for more than 20 years. We are fed up and we want all the politicians to go,” she said.

Hariri, who is leading a coalition government mired by sectarian and political rivalries, on Friday gave his feuding government partners a 72-hour deadline to agree to reforms that may ward off the crisis, hinting that he might otherwise resign.

The prime minister’s ultimatum was largely perceived by protesters as a desperate attempt by the political elite to save their seats.

Hariri had accused his rivals of obstructing his reform measures that could unlock $11bn in western donor pledges and help avert economic collapse.

The reform decisions require a 50 percent reduction in salaries of current and former presidents, ministers and MPs plus cuts in benefits to state institutions and officials. It also obliges the central bank and private banks to contribute $3.3bn to achieve a “near-zero deficit” for the 2020 budget.

The reforms also include a plan to privatise the telecommunications sector and an overhaul of the costly and crumbling electricity sector, which poses one of the biggest strains on the country’s depleted finances.

The anti-government protests, fuelled by crippling economic conditions and anger at perceived government corruption, have fanned out across the country since Thursday.

Cheerful, buoyant and hopeful that their protests would bring change, people of all ages and religions played patriotic songs and danced in the streets, with some forming human chains and chanting for their leaders to be ousted.

Festival-like scenes dominated the country from the capital Beirut to remote towns, with loudspeakers blaring music as crowds kept pouring into the streets.

“I am here because I am disgusted by our politicians. Nothing works. This is not a state. Salaries are very low, prices are very high. We don’t even have work these days,” said Cherine Shawa, 32, an interior architect in Beirut.

Ending rampant corruption is a central demand of the protesters, who say the country’s leaders have used their positions to enrich themselves for decades through favourable deals and kickbacks.

“We’re here to say to our leaders, ‘leave’. We have no hope in them but we’re hopeful that these protests will bring change,” said Hanan Takkouche, who is in her 40s and among a group of women in the capital. “They came to fill their pockets. They’re all crooks and thieves,” she added.

Many blamed the ruling elite for driving their children out of Lebanon because they failed to build a country that could provide jobs.

Army troops and security forces deployed across the country and blocked roads leading to the presidential palace.

Banks said they would remain closed on Monday and the main labour union announced a general strike, threatening further paralysis.

A chorus of voices, from union leaders to politicians, have joined popular calls for Hariri’s government to resign. The Maronite Christian Lebanese Forces party has said its four ministers would withdraw from the government.

Still, the approval of the reforms by Hariri’s partners seem to have met his conditions and will most likely push him to stay the course, government sources said.

If Hariri – a Sunni Muslim who is traditionally backed by the West and Sunni Gulf Arab allies – were to resign, it would be harder for the various parties that make up the ruling coalition to form a new cabinet.

A new cabinet would also likely see Iranian-backed Hezbollah and its allies more in control, a shift that would make it nearly impossible for international donors or Gulf Arab countries at odds with Iran to offer aid or investments.

Without a foreign funding boost, officials and economists predict a currency devaluation or a debt default within months.

The IMF said last week that Lebanon’s crisis requires tough austerity measures including tax hikes and levies on fuel, steps the country’s politicians have publicly vowed not to take.

Lebanon’s economy registered just 0.3 percent growth last year. The IMF said the reforms were needed to stem a ballooning deficit and public debt it forecasts to reach 155 percent of GDP by year-end.

The officials said the budget would not include additional taxes or fees after a decision last week to put a levy on WhatsApp calls triggered the unrest.

The reforms also called for establishing new regulatory and transparency bodies within a “short period” of time to oversee reform plans.