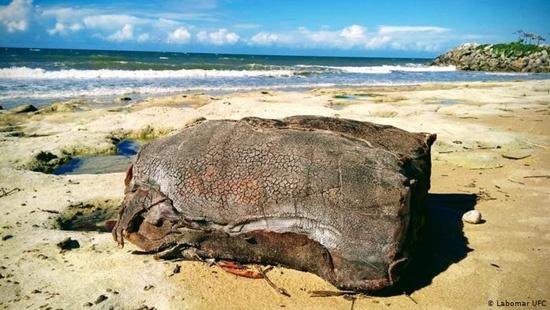 Oil spills have been plaguing Brazil’s northern coastline for weeks. But before that, another mystery had been puzzling local scientists: shipping crates, thought to be from a German vessel that sank in 1944.

During a walk along Praia Bela, literally a “beautiful beach” in Brazil’s northern state of Ceara, Carlos Teixeira comes across an odd-looking crate. It’s not the first time the marine researcher from Ceara’s state university has seen one.

“They’ve been showing up along the coast of northeastern Brazil since October 2018,” he told DW. “We just don’t know where they’ve come from.”

Between 200 and 300 such crates have appeared since then, Teixeira said, possibly from a shipwreck, but that has not been confirmed.

Interest in the crates rose when oil began washing up along the same beaches in September. “I told my colleagues this can’t be a coincidence,” he said. That’s when Teixeira began taking a closer look at the crates, which are said to have been carrying “crude rubber in bales.” One crate was marked with “French Indochina,” the Southeast Asian colony that ceased to exist after 1954.

Not long after, Teixeira found information online about the German blockade runner, SS Rio Grande. It was sailing from Japan to Europe in January 1944 when Allied ships intercepted and sank it off the Brazilian coast. Its cargo: crude rubber in bales.

The location of the shipwreck has been known since 1996. Blue Water Recoveries found it 540 nautical miles (1,000 kilometers) off Brazil’s northeastern coast at a depth of 5,762 meters (18,904 feet). That makes it the world’s deepest shipwreck found to date.

Blue Water Recoveries sent Teixeira images of the wreck, and he identified crate-like objects similar to those that have washed ashore. Then he set out to see if such crates could have made their way to Brazil. For that, he constructed a simulation with “dots originating from the shipwreck site. These dots came to the northeastern coast. That leads me to believe that the wreck is the source of the crates.”

Teixeira further sees a connection between the crates and the oil.

“The wreck was one of the hypotheses for where the oil was coming from,” as news media had reported. “But we spoke with Petrobras (the state oil company), and they said the oil was new. If the oil came from the wreck, it’d be more than 70 years old. Also, the oil is crude, not fuel.”

Although the source of the oil remains a mystery, Teixeira supports his simulation of the currents, adding whatever the source is, it must be near the wreck.

“I think it came from a latitude even with the state of Pernambuco, between 500 and 1,000 kilometers from the coast.” That would be near the wreck. “Because the oil is really spread out. If the oil were coming from closer to shore, it wouldn’t be in so many areas all at once.”

Oil has appeared along a 2,000 kilometer (1,200 mile) stretch of coastline. One theory has attributed it to an accident at a Petrobras refinery in Pernambuca in August. But Teixeira notes that the oil is in the sea far from the coast, which suggests its presence is not due to an accident at the Petrobras facility.

“The currents wouldn’t have brought the oil north. It has to be coming far from shore,” he said.

One question is what do with the crates that have washed up on shore. “Some were thrown away. Others have been left on the beach. No one’s said anything about putting them in a museum,” Teixeira said. And since each crate weighs between 80 and more than 100 kilograms (176 to 220 pounds), “they’re not so easy to carry off.”