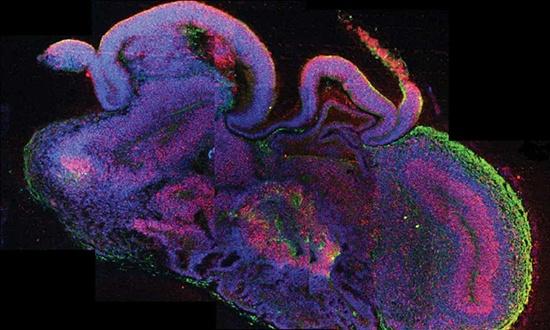 Debate needed over research with ‘potential for something to suffer’, neuroscientists say

A cross-section of a cerebral organoid. Photograph: Madeline A Lancaster/IMBA/EPA

Neuroscientists may have crossed an “ethical rubicon” by growing lumps of human brain in the lab, and in some cases transplanting the tissue into animals, researchers warn.

The creation of mini-brains or brain “organoids” has become one of the hottest fields in modern neuroscience. The blobs of tissue are made from stem cells and, while they are only the size of a pea, some have developed spontaneous brain waves, similar to those seen in premature babies.

Many scientists believe that organoids have the potential to transform medicine by allowing them to probe the living brain like never before. But the work is controversial because it is unclear where it may cross the line into human experimentation.

On Monday, researchers will tell the world’s largest annual meeting of neuroscientists that some scientists working on organoids are “perilously close” to crossing the ethical line, while others may already have done so by creating sentient lumps of brain in the lab.

“If there’s even a possibility of the organoid being sentient, we could be crossing that line,” said Elan Ohayon, the director of the Green Neuroscience Laboratory in San Diego, California. “We don’t want people doing research where there is potential for something to suffer.”

Because of the manifest difficulties in studying live human brains, organoids are considered a landmark development. They have been used to investigate schizophrenia and autism, and why some babies develop small brains when they are infected with Zika virus in the womb. Researchers hope to use organoids to study a raft of brain disorders, from Alzheimer’s to Parkinson’s, and eye conditions such as age-related macular degeneration.

But in their presentation to the Society for Neuroscience meeting in Chicago, Ohayon and his colleagues Ann Lam and Paul Tsang will argue that checks must be in place to ensure that brain organoids do not experience suffering. “We’re already seeing activity in organoids that is reminiscent of biological activity in developing animals,” Ohayon said.

In one recent study, researchers at Harvard showed that brain organoids develop a rich diversity of tissues, from cerebral cortex neurons to retinal cells. Organoids grown for eight months developed their own neuronal networks that sparked with activity and responded when light was shone on them. In another study led by Fred Gage at the Salk Institute in San Diego, researchers transplanted human brain organoids into mouse brains and found that they connected up to the animal’s blood supply and sprouted fresh connections.

Ohayon wants funding agencies to freeze all research that aims to put human brain organoids into animals, along with other work where there is an reasonable chance of organoids becoming sentient. Ohayon has developed computer models that he believes help identify when sentience is likely to arise, but adds there is an “urgent need” for more work in the area.

In Britain, researchers are already banned from working on donated embryos that are older than 14 days. The limit, which some scientists want to extend, was imposed to protect developing humans from suffering.

Last year, a group of scientists, lawyers, ethicists and philosophers called for an ethical debate on brain organoids. The authors, including Hank Greely, director of the Center for Law and the Biosciences at Stanford University in California, said organoids were not yet sophisticated enough to raise immediate concerns, but that it was time to start discussing guidelines.

Greely said there was no single ethical line when it came to organoids. “I’m confident they don’t think we’ve reached a Gregor Samsa state, where a person wakes up and finds he is an organoid,” he said, referring to the character in Franz Kafka’s The Metamorphosis who wakes up to find he is a giant insect. But he added, “If they mean the potential to perceive or to react to things, that seems to me likely.”

Greely believes the concerns become more serious if organoids perceive and react to stimuli that might cause pain. “That becomes still more important if we have reason to believe the organoid has an aversive reaction to that stimuli, that it ‘feels pain’. I strongly doubt that anyone has reached that point or come close to it,” he added.

Gage told the Guardian: “I think it is never too soon to raise issues about ethics in science, so that a thoughtful dialogue can guide scientific research and decisions.”