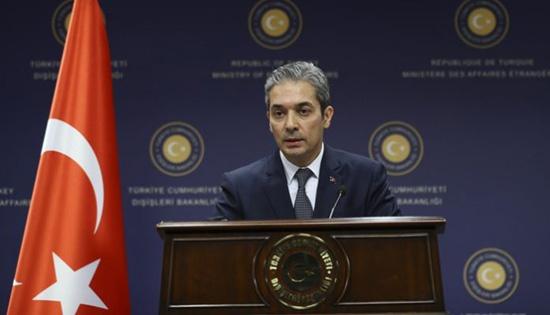 The Turkish Foreign Ministry has denied allegations suggesting that the Turkish military used chemical weapons during its nine-day incursion into northern Syria, describing the claims as “slanderous.”

“Baseless allegations that Turkey used chemical weapons within the scope of the Peace Spring Operation were made in some international media outlets yesterday and today. We categorically reject these flagrant slanders stemming from disinformation by the terrorist organization,” Foreign Ministry spokesperson Hami Aksoy said in a statement on Friday in response to a relevant question from a journalist.

Turkey launched its long-planned Operation Peace Spring on Oct. 9 aimed at taking out the Kurdish forces it sees as terrorists but which most of the West views as key partners in the fight against Islamic State in Iraq and the Levant (ISIL) militants. The Turkish military operation began days after a surprise and widely criticized White House announcement that US forces would withdraw from the region.

Yet, Turkey on Thursday agreed to a five-day ceasefire in northeast Syria to allow for withdrawal of Kurdish forces following talks between US Vice President Mike Pence and Turkish President Recep Tayyip Erdoğan.

Kurdish officials accused Turkey of using “unconventional weapons” in the conflict on Thursday – a few hours before the ceasefire was announced – and called for international inspectors to examine the injured.

Aksoy also said no chemical weapons exist in the inventory of the Turkish Armed Forces (TSK) as stated on various previous occasions.

“Turkey is a party to the Convention on the Prohibition of the Development, Production, Stockpiling and Use of Chemical Weapons and on their Destruction (CWC) since 1997. Turkey is also a party to all fundamental international instruments in the field of non-proliferation and also a member of export control regimes. In this context, Turkey fulfills all its obligations.”

The Guardian newspaper on Friday ran a story reporting that UN chemical weapons inspectors have announced they are gathering information following accusations that burning white phosphorus was used by Turkish forces against children in Syria earlier this week.