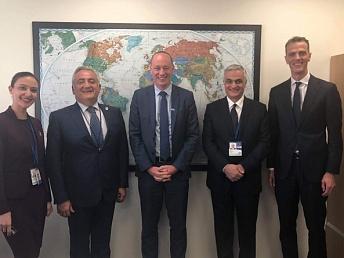 YEREVAN, October 22. /ARКА/. An Armenian delegation that traveled to Washington last week to attend the annual meeting of the International Monetary Fund (IMF) and the World Bank (WB) had a meeting with the Executive Director of the Dutch-Belgian subgroup of the IMF Anthony De Lannoy and Deputy Director Richard Dornbosch, the Armenian Central Bank reported.

On October 17, the IMF published an improved forecast for Armenia’s economic growth in 2019, raising the forecast from 4.6% to 6%.

The Armenian delegation members were also received by the IMF Director for the Middle East and Central Asia Jihad Azuri, who was said to have expressed satisfaction with the results of his August visit to Armenia.

The parties spoke about the positive results of the monitoring the implementation by the Armenian authorities of the first phase of the new program approved by the IMF in May 2019, noting the importance of the reforms envisaged in the program.

Azuri and Javadyan reached an agreement on holding a joint scientific conference in 2020 at the Training and Research Center of Dilijan.

On May 20 this year, the IMF approved the provision of Stand-By loans to Armenia in the amount of approximately $ 248.2 million for a period of 36 months. -0-