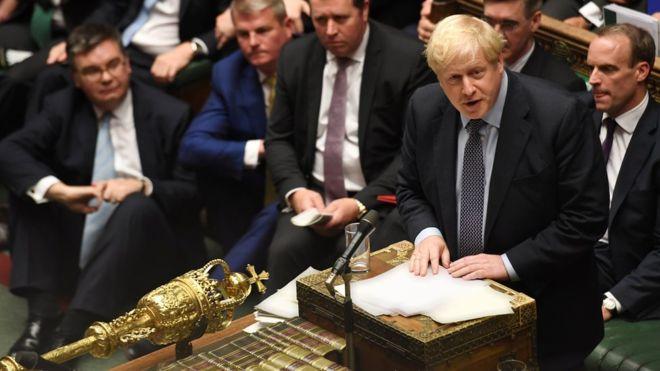 BBC.COM- Boris Johnson will urge MPs to back his Brexit deal later, as he launches a final bid to get the UK to leave the EU by the end of the month.

MPs are to vote on whether to back the prime minister’s Withdrawal Agreement Bill, which was published on Monday.

If they back his deal, they will then be asked to approve an intensive three-day timetable in which to consider the legislation.

Opposition MPs have said this will not be enough time to scrutinise the bill.

Ministers have insisted they are confident they have the numbers to get the Withdrawal Agreement Bill approved, despite losing a crunch Commons vote on Saturday aimed at ruling out a no-deal Brexit.

MPs believed by ministers to be ready to back the prime minister include pro-Leave Labour rebels and former Tory MPs now sitting as independents who would rather leave with Mr Johnson’s deal than no deal at all.

If MPs back the bill, they will then vote on the government’s “programme motion”, which sets out the timetable for the legislation’s passage through the Commons.

On Monday, Leader of the Commons Jacob Rees-Mogg warned the programme motion was essential if the UK was to meet the Halloween Brexit deadline.

“People who do not vote for the programme motion will not be voting for Brexit on October 31,” he said.

Here it is. And here we go. The government has now published the pages and pages of new laws that need to be passed to make our departure from the EU happen.

Forget the meaningful vote, to get Brexit done – as the prime minister never tires of saying – this whole bundle of legislation has to pass.

The European Union (Withdrawal Agreement) Bill is a document of 110 pages that details exactly how Parliament is expected to put the deal that the prime minister agreed with his counterparts around the continent into UK law.

For Brexit watchers it is a big moment.

If the programme motion is approved, the bill will then move to the committee stage – which will continue on into Wednesday – when MPs will have the opportunity to put down amendments.

These are expected to include attempts to keep the UK more closely aligned with the EU through a customs union and to stage a second referendum.

Both are bitterly opposed by the government, raising the possibility that it could pull the bill altogether if either gets through.

Ahead of the debate, Mr Johnson called on MPs to get behind the government’s plans.

“The public doesn’t want any more delays, neither do other European leaders and neither do I,” he said.

“Let’s get Brexit done on 31 October and move on.”

However, Labour’s shadow Brexit secretary, Sir Keir Starmer, accused ministers of trying to “bounce” MPs into approving a bill that could cause “huge damage” to the country.

Shadow foreign secretary Emily Thornberry said Labour was “outraged” by the government’s attempt to push the bill through in a short time.

“When I did the Health and Social Care Act, which was a major piece of legislation, it took three months,” the Labour MP told BBC Breakfast.

“In order for politicians to do their job properly, we do need to have time,” she added. “We don’t see why we should play Boris Johnson’s game.”

The SNP’s Pete Wishart also condemned a lack of economic impact assessments of the deal ahead of the attempt to pass the legislation.

“Three days to consider a bill [that] somebody suggested is 100 pages… how on earth are we going to have the chance to assess that properly?”

But Mr Rees-Mogg said other acts had been brought and passed with short notice.

“A king emperor left in 24 hours, and we are removing an imperial yoke in over a week,” he added.

What is in the Withdrawal Agreement Bill?

The 110-page document will give legal effect to the withdrawal deal negotiated by Mr Johnson.

His plan ditches the backstop – the controversial measure designed to prevent a return to physical checks on the Irish border.

Instead it essentially draws a new customs border in the Irish Sea, as goods which could travel onwards to Ireland will have to pay a duty tax.

It also will see the whole of the UK leave the EU customs union, meaning it could strike trade deals with other countries in the future.

The WAB will also turn any agreed transition period into law, fulfil requirements on the rights of EU citizens in the UK after Brexit, and allow ministers to make “divorce payments” to the EU foreseen under the current deal.

But MPs will be able to vote on amendments – changes or add-ons – to the bill.

If the government cannot get the bill through Parliament, the default legal position is for the UK to leave without a deal on 31 October, but that will change if the EU grants an extension.

Ex-Tory MP Rory Stewart, who lost the party whip when he voted in support of the Benn Act, said he would back Mr Johnson’s bill in principle but wanted to ensure Parliament had a “normal” amount of time to debate it.

“There’s already so much suspicion and mistrust which extends to the government, and Parliament, and others,” he told BBC Radio 4’s Today programme.

“We need to finish this in the proper way, and if we’re going to deliver Brexit, we need to deliver it in a way that Brexiteers and Remainers believe was taken through Parliament fairly,” he said.

Tuesday’s votes come after Mr Johnson failed to get the agreement he reached with the EU last week signed off in the Commons on Saturday.

MPs instead backed an amendment withholding their approval until the bill has faced the scrutiny of both the Commons and the Lords and been passed into law.

The amendment worked alongside the so-called Benn Act, which required the prime minister to ask the EU for an extension to the 31 October deadline to prevent a no-deal Brexit.

Following Saturday’s developments, Mr Johnson sent an unsigned letter asking for the delay, along with a signed letter saying why he did not agree with any further delays.

There has been no official word from the EU yet on whether the bloc will grant a delay or what length it would be.