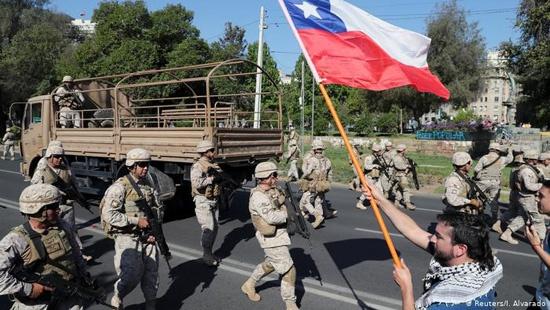 Latin America’s most prosperous country is braced for fresh upheaval after Chile’s president expanded a state of emergency beyond the capital and the death toll from three days of violence rose to 11.

“We are at war with a powerful and uncompromising enemy that respects nothing and no one,” Sebastián Piñera declared in an unyielding late-night address on Sunday.

Official statistics hinted at the scale of the turmoil unleashed by clashes and riots over the weekend: 1,554 arrests, more than 10,000 troops sent on to the streets and reports of at least 40 outbreaks of looting.

“It was a weekend of rage,” said Patricio Navia, a political scientist at the Center for Latin American and Caribbean Studies in New York.

The convulsion comes days after Chile’s centre-right leader hailed his country as a haven of Latin American tranquility that was managing to avoid the economic and political strife blighting Argentina, Paraguay, Mexico, Brazil, Peru and Ecuador.

“Chile looks like an oasis,” the billionaire conservative boasted in an interview with the Financial Times (paywall).

The crisis began early last week as a youth revolt against a 3% increase in metro fares that the government was subsequently forced to scrap.

As outrage over those measures grew, student protesters stormed metro stations as part of a fare-dodging movement designed to pressure the government. On Friday, demonstrators torched at least a dozen stations, causing an estimated $300m (£230m) of damage.

But Paula Rivas, the president of the Metro Workers’ Union in the capital, Santiago, said the fare hike was not the driving force behind the mutiny.

“It’s the low pensions, the privatisation of water, the rise in electricity prices, the healthcare system, the need for equal education rights,” she said. “The metro fare was just the trigger, it is symbolic. It made people say, ‘enough’. We will not be silenced.”

Observers and protesters say the rebellion – the worst unrest Chile has faced since the dying days of Augusto Pinochet’s dictatorship three decades ago – is fuelled by deep-rooted disillusionment at how millions of citizens have been frozen out of the country’s economic rise.

“This isn’t because of the metro price – it is because the system is squeezing us like lemons,” said Bessy Gallardo Prado, a 34-year-old law student who has joined the protests.

“This is happening because of decades of injustice, abuse, and inequality. There is no social security in this country. People earn little and work a lot and wages are not enough to make ends meet.”

Navia, who is based in the Chilean capital, said unlike in other Latin American countries, public anger was not the product of worsening living conditions.

“Living conditions are in fact improving. Poverty levels are going down … Chile has been growing for most of the past decade,” he said. “The problem is that people perceive that wealth and opportunity are not evenly distributed. There isn’t a level playing-field.

“They feel like they are at the gates of the promised land. And they see all the elites inside having fun and enjoying the benefits of economic development – and they are not being let in.”

The Santiago mayor, Karla Rubilar, struck a conciliatory tone on Monday, calling for dialogue between authorities and demonstrators.

“We want the word of the day to be ‘rebuilding’ – rebuilding trust. Because we know it has been lost. Not during this government, but over many years,” she told reporters.

But many blame Piñera, who was elected in 2017 and is one of Chile’s richest men, for inflaming the situation with his uncompromising and inept response.

As Santiago descended into chaos last Friday and the state of emergency was declared, the president was photographed dining with his family at an upmarket restaurant. “Piñera eats pizza as Santiago burns,” one critic tweeted.

On Sunday night he caused further fury with a hardline address in which he claimed the country was “at war” with “evil” delinquents who were bent on causing chaos and destruction.

Navia said: “It was reminiscent of George W Bush … It is a provocation. When you tell protesters you are at war with them, they will go out and provoke you.”

He said Piñera’s administration appeared to believe the declaration of a state of emergency would extinguish the uprising – but many protesters were defying the government’s curfew.

“Things are tense and quiet [in Santiago] – almost like a public holiday,” Navia said. “But this could reignite in the coming days.”