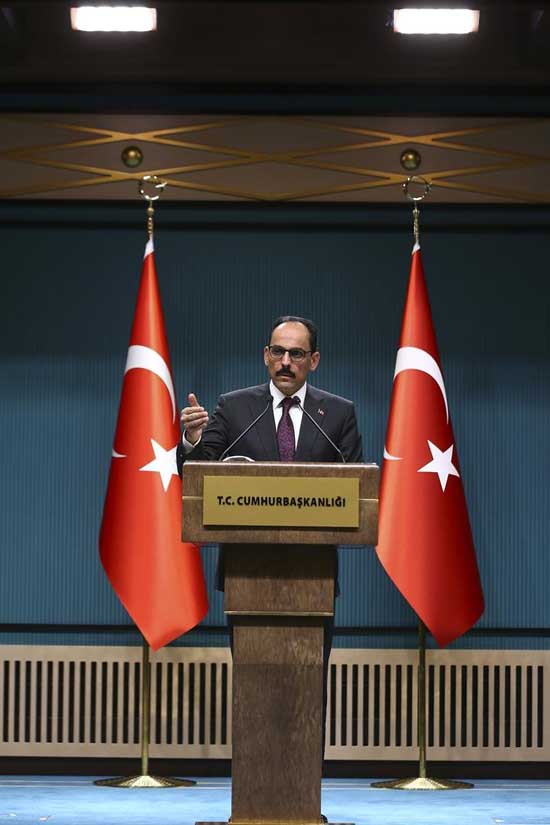 The Turkish and Russian presidents are meeting in Sochi as the five-day cease-fire expires. In a DW interview, Ibrahim Kalin spoke about his country’s aims in the Syria conflict and what to expect from the meeting.

At an interview with DW, Turkish presidential spokesperson Ibrahim Kalin said that if the Syrian Kurdish People’s Protection Units (YPG) pull back as agreed, there “won’t be … any need for further military action.”

Kalin also noted that the main topic during President Recep Tayyip Erdogan’s meeting with Russian President Vladimir Putin in Sochi on Tuesday will be securing the safe zone to return Syrian refugees. Kalin said Turkey would only send refugees back to Syria who are willing to return, and will not tolerate a YPG presence in northeastern Syria, be it under the US or Russian flag.

DW: The cease-fire — or the cessation of hostilities, or whatever you’d like to call it — is about to end on Tuesday night. There have been quite a few reports that there have been violations of this cease-fire. Is that correct?

Ibrahim Kalin: That is true. We’ve reached this agreement with the Americans three days ago. The first phase was to be a pause in the operation, and the second one will be halting of the operation when YPG terrorists completely withdraw from the area. Unfortunately as of this morning there have been about 20 violations by YPG. They use snipers, rockets, attacking our soldiers as well as other groups there. We lost one soldier unfortunately in this incident. We are committed and sticking to the agreement. In fact, yesterday we identified the two routes to use and about 86 vehicles and ambulances went in, took these YPG people and left without any incidents. We are hoping that things will remain calm until tomorrow when the deadline is over and they have completely left the area by tomorrow evening. Then we can hold the operation as agreed in the joint declaration and agreement that we have had with the Americans.

Is there a chance that the cease-fire is going to be extended?

No; we said five days, 120 hours. If this part of the mission is completed by tomorrow and we make sure that all YPG terrorists have left the area then we will hold the operation.

So then there will be no further hostilities, is that what you’re saying?

Yes, of course. There won’t be … any need for further military action but our military will make sure that these areas are safe for civilians. We had two main goals with this operation. One was to clear it from terrorists. The second one is to enable the refugees to go back to their homes. So we want to create conditions suitable for them to go back to towns that they’ve come from. We work with the UN principle, the return of the refugees voluntarily, safely and in a dignified manner. We will never force anybody to go anywhere they don’t want to go.

German Foreign Minister Heiko Maas said this weekend that he regards this as operation as an invasion and a contravention of international law. What is your response?

To the contrary: in fact, the presence of our soldiers there is a guarantee, a safety for first moving the political process forward in Syria, secondly for the protection of Syrian refugees and internally displaced people. We have military presence in the Idlib area, we have 12 military posts. It is thanks to our soldiers in Idlib that we didn’t have another humanitarian crisis and migration wave from Idlib. Remember, about 3 million people are squeezed in that part of Syria and if we had let the regime attack these places and take over the Idlib area, we would have had maybe a million or 2 million more refugees coming to Turkey because they have no other place to go. Our European friends should be thankful to our soldiers for doing this very dangerous but important work.

Erdogan is meeting with Russian President Vladimir Putin on Tuesday, and a lot seems to hinge on this meeting. Can you tell us what we can expect?

In the Astana process, we have worked extremely well with the Russians. We have reached the Idlib agreement. Now, with Americans saying that they’re leaving northeast Syria we have a new situation in the northeastern part of Syria. This is what our president will discuss with President Putin tomorrow. We want to create this safe zone from the Euphrates River to the Iraqi border. That’s about a 444 square-kilometer area [approximately 171 square miles — Editor’s note]. And we want to clear this area from all ISIS, PYD/YPG terrorists [the YPG are the armed wings of the Democratic Union Party, PYD — Editor’s note] and other elements that may intimidate the refugees to go back to. This is not only Turkey’s responsibility; obviously this is the responsibility of the international community. So that’s why we are working with the Americans. We want to work with the Europeans. We are working with the Russians to make sure that this area becomes a safe zone for the Syrian refugees.

Most recently, the talk has been about much smaller zones that Turkey might take under its protection, if you will. Where does that come from?

Our president shared this plan with world leaders at the UN. It’s not something new. Our president has called for a safe zone for many years. When the Syrian crisis began, our president called for a no-fly zone in the north of Syria because he knew that if the regime is not stopped, it will kill its own people. And that’s exactly what happened. If he had this safe zone before, we will have saved many lives and probably we wouldn’t face this refugee crisis. So we will discuss this with them, how we can create this area for the refugees and clear that area from YPG. We will not accept changing the American flag with the Russian flag and YPG still functioning in those areas, intimidating people and posing a threat to our national security.

There are accusations from Amnesty International and other human rights groups about human rights violations by Turkish or Turkish-supported forces in northern Syria. There is talk about attacks on civilians; there’s even talk about napalm bombs. What’s your response?

We take these allegations very seriously. If there have been any violations of the law on any unlawful act executions or attacks on civilians or anything like that we will take them very seriously. A number of investigations have been launched already into those cases.

There are millions of Turkish people living in Germany, also a very large number of Kurds. And tensions from the current conflict are spilling over into Germany. What would you advise?

The PKK is listed as a terrorist organization in Germany [the Kurdistan Workers’ Party, a militant political organization based in Turkey and Iraq — Editor’s note]. German authorities are taking measures against this terrorist network, [when it is] showing up [with] flags and organizing events here. I think they should be very careful about this. Also, I have noticed that there have been a number of incidents. Some of our peaceful protesters and citizens have been attacked by PKK supporters. In fact, one embassy car has been burned. This is really terrible. About 20 or so of our citizens have been injured. I hope the German authorities will take strict measures against these people. We don’t want the Turkish community to be affected by this. Within freedom of speech if they want to express their views, they are most welcome in Germany as well as in Turkey. But resorting to violence, using freedom of speech is not acceptable anywhere.