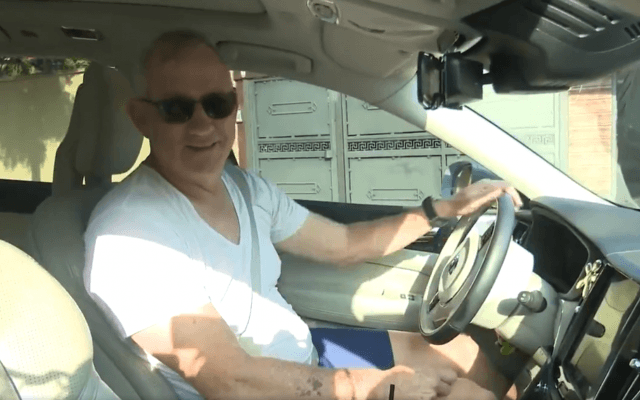 Blue and White leader set to be first person in a decade other than Netanyahu to try assembling a coalition; Ayelet Shaked says New Right will only negotiate as part of PM’s bloc

By TOI staff– By www.timesofisrael.com

Blue and White party leader Benny Gantz said Tuesday morning that he was optimistic about his chances of forming a government, shortly before he was to become the first person in more than a decade other than Prime Minister Benjamin Netanyahu to be tasked with that challenge.

Netanyahu announced Monday that he would return the mandate — the opportunity to put together a government — to President Reuven Rivlin ahead of Wednesday’s deadline, blaming his failure on Gantz, Blue and White deputy head Yair Lapid, and Yisrael Beytenu party leader Avigdor Liberman.

Rivlin is now expected, probably on Tuesday, to charge Gantz with the task of trying to muster a coalition that can win a Knesset majority.

“The feeling is terrific,” a cheerful Gantz told reporters in his car, as he left his home in Rosh Ha’ayin. “We finished a morning workout and will now go for the day’s work. Everything is okay. We are always optimistic; it is a way of life.”

At 12:15 p.m., Gantz will pay his final respects to former Supreme Court president Meir Shamgar, who died Friday at the age of 94 and whose body will lie in state at the entrance to the Supreme Court ahead of his funeral later in the day. Netanyahu is expected to arrive 45 minutes later.

On Monday, the Blue and White party issued a statement saying that “the time for spin is over” and that the party was “determined to form the liberal unity government, headed by Gantz, that the nation elected a month ago.”

It was the second consecutive time Netanyahu has been unable to build a majority. Following elections in April, Netanyahu was one seat short of a majority and pushed through a vote to dissolve the Knesset and call a snap vote rather than have another lawmaker be tasked with forming a government.

Gantz now has 28 days to try and do what Netanyahu could not. If he fails, any MK will have 21 days to obtain the support of a Knesset majority to form a government. If no one succeeds, elections will be initiated automatically — a third round inside a year after April’s and September’s inconclusive votes.

Gantz is seen as having an even slimmer chance than Netanyahu of forming a coalition.

MK Ayelet Shaked said Tuesday that her New Right party would agree to meet with Gantz’s team but will not hold independent negotiations, committing to remain part of Netanyahu’s 55-strong bloc of supporters, which has vowed to only enter a coalition together and hold negotiations only as a group.

“If we are invited to a meeting with Gantz, of course we’ll come but we will make it clear to Gantz that he is wasting time and would better start negotiating with the bloc’s representatives,” Shaked said in a tweet.

Netanyahu was initially tasked by Rivlin with trying to form a government based on the strength of his pact with right-wing and ultra-Orthodox parties to negotiate as a bloc of 55 MKs after September 17’s inconclusive elections (Likud: 32; Shas: 9; United Torah Judaism: 7 and Yamina 7). Gantz heads a bloc of 54 MKs from the center, left and Arab parties (Blue and White: 33; Labor-Gesher: 6; Democratic Camp 5; and 10 out of 13 MKs from the mainly Arab Joint List). But the 10 Arab MKs in that group would not join a Gantz-led coalition. (Three other MKs from the Joint List did not back either candidate.)

Liberman is not in either bloc and has called for a secular unity government comprising Likud, Blue and White and his own party. But Netanyahu has refused to abandon his ultra-Orthodox partners Shas and United Torah Judaism. And Gantz has hitherto refused to partner Likud so long as Netanyahu is facing possible indictment in three corruption cases.

In a video statement Monday, Netanyahu said he had worked “incessantly” over the past 26 days to form a “broad national unity government,” which would include his Likud party’s religious allies and Blue and White, but had been thwarted by Gantz.

“I made every effort to bring Benny Gantz to the negotiating table. Every effort to establish a broad national unity government, every effort to prevent another election,” he said. “Unfortunately, time after time, he declined. He simply refused.”

A statement from Rivlin’s office on Monday said the president had received Netanyahu’s request to return the mandate.

The statement said the director-general of the President’s Residence would inform faction heads that Rivlin intends to now task Gantz with forming a government.

Rivlin has suggested a unity government in which power would be equally divided and Netanyahu and Gantz would each serve two years as prime minister. Rivlin implied, but did not specify, that Netanyahu would take an open-ended leave of absence if or when he is indicted in one or more of the probes in which he faces charges. Under the arrangement set out by Rivlin, Gantz, as “interim prime minister” in such a scenario, would enjoy all prime ministerial authority.

But the two parties have been unable to agree, among other matters, on who would be prime minister first under such an arrangement.

Prosecution officials said last week that they hoped to reach a final decision on whether to indict the premier in the three cases by the end of the year, and possibly by next month.