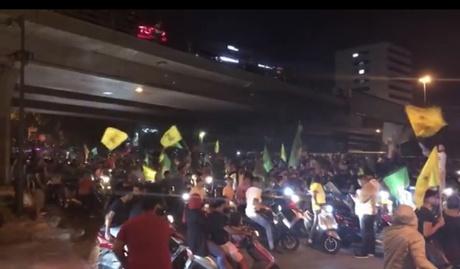 Supporters of Hizbullah and the AMAL Movement roamed some of Beirut’s streets on motorcycles on Monday evening, carrying flags of the two parties and shouting insults against what they called “the revolution.”

Media reports said the army prevented the convoy from entering the protests area in downtown Beirut and that the motorcycles “returned to Beirut’s southern suburbs” after roaming the capital’s streets.

“During the phone call, he (Hariri) stressed the need to protect the protesters and not to allow harm against any of them, while emphasizing the need to reopen roads to facilitate citizens’ freedom of movement in all regions” as well as the transfer of essential goods and medical crews.