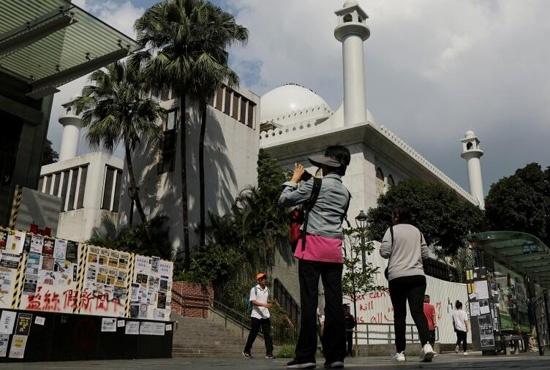 Hong Kong leader Carrie Lam apologized on Oct. 21 after police hit a major mosque with water cannon as they battled protesters during another day of political unrest in the Asian financial hub.

Lam visited the mosque before she was due to head to Japan to attend Emperor Naruhito’s enthronement ceremony in Tokyo, and as the city cleaned up the mess from violent protests the night before, the latest in five months of political turmoil.

In one instance, a cannon drenched the front gate and steps of the Kowloon mosque, Hong Kong’s most important Islamic place of worship where a few people had gathered including journalists. Blue stains remained on the road in front as worshippers gathered for prayers on Oct. 21.

Lam visited the mosque on Oct. 21 morning dressed in a shawl, and apologized to Islamic leaders, according to a spokesman.

Lam’s apology on Oct. 21 further underscored the sensitivity, and was accepted by worshippers, who lamented being caught up in the unrest.

“It’s a symbol of peace,” said Waqar Haider, an interpreter for South Asian residents and worshipper at the mosque. “It shouldn’t have happened…South Asians have not been involved in any protesting.

Chief Imam Muhammad Arshad also said the apology was “accepted” and that the Islamic community hoped to continue living in Hong Kong in peace.

South Asians, who hail from Pakistan, India, Nepal and Bangladesh, comprise about 1% of Hong Kong’s population, according to 2016 census figures.

The community is concentrated around the mosque and the nearby Chungking Mansions building, a ramshackle collection of restaurants, cheap hotels and South-Asian run stores.

The police said in a statement the mosque had been accidentally sprayed and that they “respect religious freedom and will strive to protect all places of worship.”

Elsewhere across the Kowloon peninsula protesters had torched stores and sprayed graffiti on roads as they skirmished with police.

Families and the elderly took to the streets in what began as a peaceful march, many wearing masks or carrying umbrellas to shield their faces in defiance of an anti-mask law that authorities invoked this month to try to quell the unrest.