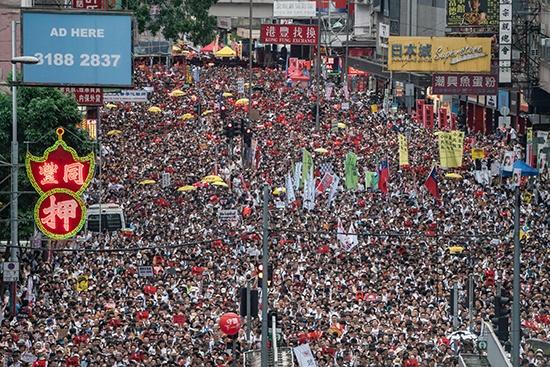 Hong Kong Pro-Democracy Protest: Hong Kong has been relatively calm for the past week, with only small, often colourful demonstrations, and Sunday’s march will test the strength of the pro-democracy campaign.

Hong Kong pro-democracy campaigners to stage a protest on Sunday

Hong Kong pro-democracy campaigners on Friday vowed to stage a major march at the weekend despite police ruling the rally illegal, setting the scene for possibly more unrest in the Chinese-ruled city, battered by months of violent protests.

Hong Kong has been relatively calm for the past week, with only small, often colourful demonstrations, and Sunday’s march will test the strength of the pro-democracy campaign, which has in the past rallied millions on to the streets.

In rejecting the protesters’ request for a march permit, police said past events had been “hijacked by a group of radical protesters” who set fire to buildings, hurled petrol bombs at police, detonated a home-made bomb and wrecked infrastructure.

“While we always respect citizens’ rights to assembly and freedom of speech, we are alarmed by this epidemic that radical protesters resort to violence in expressing their opinion,” Acting Chief Superintendent of Police Public Relations Branch, Kong Wing-cheung, said in announcing the rejection.

Thousands have defied police in the past and staged mass rallies, often peaceful at the start but becoming violent at night. “We will not back down even after the attack on the Civil Human Rights Front convener Jimmy Sham. Our most powerful force is the unity and resistance of this civil society,” said the rights group, calling on the public to rally on Sunday.

The human chain was planned to stretch a 40 km (25 miles) along the city’s metro, with many people wearing eccentric masks in defiance on a ban on covering faces at public rallies. Wearing a face mask at a public rally carries a maximum penalty of one year in jail.

“I am not worried about being prosecuted because I violate the anti-mask law. I think people won’t be afraid to come out on Sunday,” said Kiki, 29, wearing a pig face mask.

Hong Kong has been hit by four months of protests, driven by concerns Beijing is eroding freedoms granted when Britain handed the city back to China in 1997. China denies the accusation, blaming foreign nations such as the United States and Britain for inciting the unrest.

The crisis in the Chinese-ruled city is the worst since the handover and poses the biggest popular challenge to China’s President Xi Jinping since he took power.  Xi has warned he would crush any attempt to split China. HONG KONG MAN ACCUSED OF MURDER Riot police and protesters have fought street battles, with police firing tear gas, rubber bullets and occasionally live rounds against brick and petrol-bomb throwing activists. Two people have been shot and wounded by police and thousands injured.

Police have arrested more than 2,300 people since June. Many Hong Kong residents are angry at what they believe is excessive force used by police, and the introduction of the face mask ban by embattled leader Carrie Lam. The protests started over a now-withdrawn extradition bill but have evolved into calls for greater democracy.

Lam has rejected some of the protesters’ other demands, including universal suffrage and an independent inquiry into police behavior. The extradition bill would have allowed Hong Kong residents to be sent to Communist Party-controlled courts for trial.

The case of a young Hong Kong man, Chan Tong-kai, accused of murdering his girlfriend in Taiwan last year before fleeing back to Hong Kong, was held up originally as an example of why an extradition bill was needed. Lam’s office said on Friday Chan had written to her saying he would “surrender himself to Taiwan for his alleged involvement in the homicide case in Taiwan upon prison discharge”. Chan is currently serving a 29-month sentence in Hong Kong for money laundering.

It was not immediately clear what had prompted his letter or what plea he planned to make. Hong Kong hub is facing its first recession as a result of the unrest, which has damaged tourism and retail. Protesters dressed in black ninja-like outfits have torched metro stations and Chinese banks and shops they believe are linked to mainland China.

Many businesses have been forced to close. China has banned the bulk shipment to the city of black clothing and other items popularly used by Hong Kong protesters, staff at Chinese courier firms said.

Secretary for Transport and Housing, Frank Chan, said on Friday it would be weeks before the metro operated fully. Pro-democracy candidates will stand in almost all 452 seats in Hong Kong’s upcoming local elections, encouraged by the protests, with the outcome of the November poll a barometer of support for the city’s government.