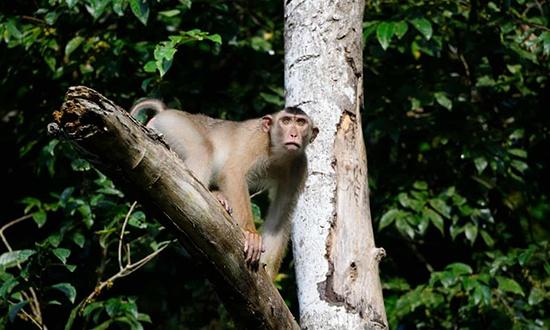 Scientists in Malaysia have said they were “stunned” to discover monkeys regularly killing and eating rats on palm oil plantations, providing a natural anti-pest measure in the country, which is responsible for 30% of the world’s palm oil production.

A report released in Current Biology on Monday, showed that southern pig-tailed macaques, generally thought to eat mainly fruit plus occasionally lizards and birds, foraged for rats on plantations. The authors said that the monkeys’ appetite for rodents showed that rather than being pests, as is commonly believed, the primates’ presence reduced crop losses.

“I was stunned when I first observed that macaques feed on rats in plantations,” said Nadine Ruppert, senior zoology lecturer at University Sains Malaysia, who co-wrote the report. “I did not expect them to hunt these relatively large rodents or that they would even eat so much meat.”

The report monitored macaques between January 2016 and September 2018 in plantations around Malaysia’s Segari Melintang forest reserve. It showed that each of the monitored macaque groups, featuring an average of 44 monkeys, killed around 3,000 rats each year. Rats are estimated to damage an average of 10% of oil palm crops by eating its fruit, compared with the macaques which damage 0.54%. As a result, the authors said that, overall, the rat-eating monkeys help save crops.

Malaysia creates around 19.5m tons of palm oil per year – the world’s most popular vegetable oil – making it one of the biggest producers of the product globally. It is used in many products, from shampoo to lipstick to bread and chocolate. It is also a cleaning agent and is used as a component in fuels such as biodiesel.

Plantations’ effects on forests and peatlands and the wild animals that live there have made them hugely controversial. Large areas are often burned and cleared to make way for the plantations, releasing large amounts of carbon dioxide into the atmosphere.

Southern pig-tailed macaques are listed as vulnerable by the International Union for Conservation of Nature, but are regularly shot by palm oil plantation staff in Malaysia. The report authors hope their findings will help reduce such behaviour and promote a “win-win solution”.

“Our results suggest important opportunities for mitigating human-wildlife conflicts,” they wrote. “Farmers and palm oil companies are encouraged to protect primates in their natural habitat via wildlife corridors between forest patches and viable interfaces between forests and plantations.”