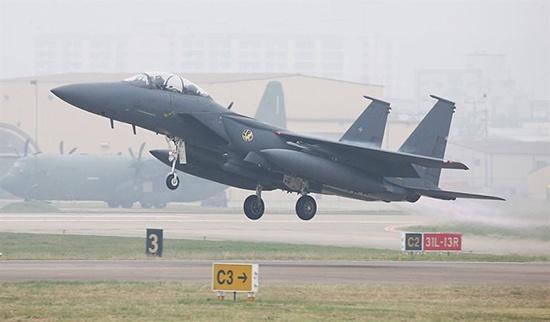 The  Korea Times – Six military aircraft believed to be from Russia violated South Korea’s air defense identification zone over the East Sea on Tuesday, prompting the Air Force to scramble fighter jets to turn them back, a Joint Chiefs of Staff (JCS) officer said.

The planes entered the Korean Air Defense Identification Zone (KADIZ) earlier in the day without prior notice, the officer said, adding that F-15K fighter jets were scrambled to the area to force the planes to retreat.

Other details, including the type of the planes, their flight courses and how long they stayed in the zone, were not immediately available.

Russian military planes have entered the KADIZ more than 13 times so far this year, according to government data.

On July 23, a Russian A-50 early-warning aircraft intruded into South Korea’s territorial airspace over the country’s easternmost islets of Dokdo in the East Sea twice, leading the Air Force to fire hundreds of warning shots.

The intrusion came shortly after two other Russian aircraft and two Chinese military aircraft breached the KADIZ between Dokdo and the eastern island of Ulleung several times in unusual joint air maneuvers between the two countries.

In order to prevent such cases, South Korea and Russia have been pushing to set up a military hotline between their air forces to exchange their flight information, according to Seoul’s Joint Chiefs of Staff (JCS).

The two sides began discussing the matter in 2004 and wrapped up consultations on the draft of the envisioned MOU in November last year, it added.

The air defense zone was first drawn in 1951 by the U.S. Air Force during the 1950-53 Korean War to prevent air clashes between nations surrounding the Korean Peninsula. Last year, Seoul expanded it to counter China’s unilateral decision to expand its own to cover a reef and other islands off the southern coast.

The air zone is not part of a country’s air space and not bound by international law. (Yonhap)