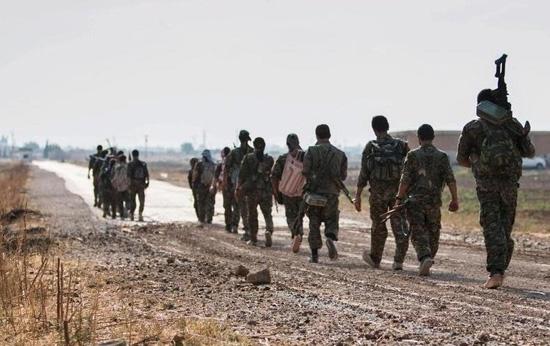 Between the beginning of the 120-hour pause in Operation Peace Spring on Oct. 17 and Oct. 21, some 125 vehicles belonging to members of the YPG had left the planned safe zone and headed in the direction of al-Hasakah city, security sources said.

“If any terrorists remain after [10 p.m.], they will be neutralized,” security sources told Hürriyet Daily News on Oct. 21.

Following the withdrawal of the YPG, Turkey wants to set up a 120-kilometer (75-mile) “safe zone” between Tal Abyad and Ras al-Ain, and this will then be extended to 444 kilometers, according to the sources.

“We are working closely with the U.S. on the issue of collecting weapons delivered to the YPG,” said the sources, adding that the process has yet to be finalized.

Turkey on Oct. 9 launched a cross-border offensive along with Syrian National Army against the YPG group, viewed by Ankara as “terrorists”.

Turkey and the United States agreed on Oct. 17 to pause the Turkish “Operation Peace Spring” for 120 hours to allow the withdrawal of terrorist YPG/PKK forces from the planned safe zone.

Security sources told Daily News that these establishments will be in the format of “military bases” similar to the one in northern Iraq. The security of the safe zone will be accommodated by local security forces.

No civilian casualties in Syria

Despite the deal with the U.S., the YPG carried out 36 harassing fires and violations in northern Syria so far, said the Defense Ministry on Oct. 21.

Five Turkish soldiers have been killed so far during the operation while 86 soldiers have been injured, Defense Ministry spokesperson Lt. Cmdr. Nadide Sebnem Aktop told reporters on Monday. The ministry added that 76 members of the “Syrian National Army” fighting with them have died, while 273 fighters have been wounded. As a result of the rockets and mortars fired into the borders from the operation area, 20 Turkish citizens were killed and 187 citizens were injured, she noted.

The operation has “liberated a total of 111 settlements in northern Syria so far and 1,500 square-kilometer (579-mile) wide area was taken under control, Aktop said, noting that Operation Peace Spring has caused no civilian casualties in Syria.