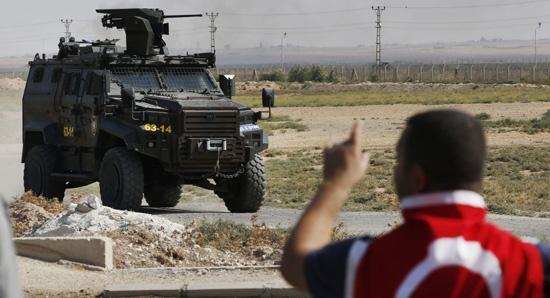 US President Donald Trump is “fully prepared” to use military force against Turkey if “needed,” Secretary of State Mike Pompeo has declared, qualifying the statement by insisting Washington prefers to use its “diplomatic powers.”

“We prefer peace to war,” Pompeo told CNBC in a taped interview that aired Monday afternoon.

But in the event that kinetic action or military action is needed, you should know that President Trump is fully prepared to undertake that action.

He stopped short of revealing what action on Turkey’s part would constitute such a “need.”

Pompeo added that Washington would use economic and “diplomatic powers” before breaking out the heavy artillery. He did not want to “get out in front of the president’s decision about whether to take the awesome undertaking of using America’s military might,” he said, indicating that it was up to Trump to decide whether Ankara had crossed the line.

Turkey and the US agreed on a five-day ceasefire last week, allowing the Kurds to clear the area Ankara wants to turn into a safe zone. While both sides have accused the other of breaking the temporary truce, Trump bragged to reporters on Monday that “the ceasefire’s holding.”

Some US troops were withdrawn from northeast Syria earlier this month before Turkey launched its operation, but their future remains unknown. The Pentagon insists they will remain in Syria to guard the oil fields while Trump has said they will be redeployed elsewhere in the Middle East.

The Pentagon has called on NATO to sanction Turkey, despite its being a member of the alliance, and both the president and Congress have threatened their own sanctions against the country.