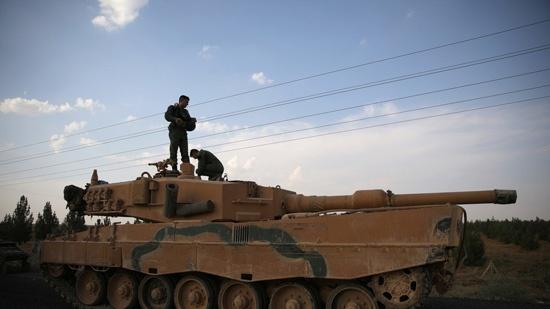 Turkey will not be launching a new offensive against Kurdish militias in northern Syria, following a five-day pause in hostilities and high-level talks in Moscow, Ankara’s Defense Ministry said.

Following lengthy talks on Tuesday, Russian President Vladimir Putin and Turkish President Recep Tayyip Erdogan agreed that Russian military police and Syrian servicemen will be deployed to northeastern Syria, which was targeted by Turkey in their ‘Operation Peace Spring.’

The Turkish Defense Ministry then said in a statement that there was “no need to carry out a new operation at this stage,” adding that the creation of a “peace corridor” in the border area would ensure the safe return of millions of displaced Syrians.

Turkey’s latest incursion into the north began earlier this month, directed at Kurdish militias it says are linked to terrorism and its own domestic Kurdish separatist movement.

Until recently, around 1,000 American soldiers were stationed with the Kurdish fighters near the border, insulating them from a Turkish offensive, but a sudden US withdrawal last week cleared the way for Ankara’s operation, which it had threatened for months. Washington’s retreat paved the way for a deal between the Kurds and Damascus, allowing Syrian forces to regain control of territories in the northeast after over seven years of war.

Even on Tuesday, Ankara questioned if the US had honored its end of the deal and facilitated the withdrawal of Kurdish forces, but the Turkish ministry then said Washington told Ankara that the Kurdish groups had all left the area by the end of the 120-hour ceasefire pause.

US President Donald Trump also weighed in on the development, calling it “good news” in a tweet on Monday night.

The deal struck between Ankara and Moscow on Tuesday will ensure the territorial integrity of Syria; allow the government to regain control over towns and cities in the northeast; establish Turkish-Russian patrols along the border; and revitalize the Adana Accord, a security pact struck between Damascus and Ankara in 1998. Dealing with captured Islamic State militants was also addressed in Tuesday’s agreement, which the Syrian government has endorsed.

“The Sochi agreement has cemented the Russian-Turkish cooperation in Syria, also effectively reducing the American influence in the country,” Demidras said. “United Syria has been secured.”