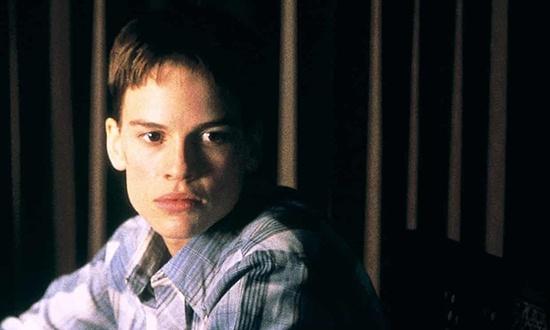 In 1999, Hilary Swank won plaudits for playing Brandon Teena, a murdered trans man, but in the years since, a backlash has been brewing

By the usual logic of such things, Hilary Swank was not supposed to win the 1999 best actress Oscar. She was 25 years old and relatively unknown, best recognised from undistinguished roles in The Next Karate Kid and Beverly Hills 90210. She was up against the never-awarded Hollywood royal Annette Bening, who had a juicy, grandly entertaining role in the Academy’s favourite film of the year, American Beauty – which just happened to win every other major category it was up for that night. Swank’s film, Boys Don’t Cry, was only up for two acting prizes, and even those nominations counted as hard-fought victories for a tough $2m indie on the subject of transgender hate crime, that had to make judicious edits to avoid a commercially crippling NC-17 rating.

Bening had won the cliquier Screen Actors Guild award, often a harbinger of Oscar victory. Yet when Swank prevailed in what had been a tight months-long race, confidently taking the stage to accept her statuette from a happily baffled Roberto Benigni, no one was especially surprised. Because sometimes, amid the politics and strategy of awards campaign season, a certain level of performance cannot be denied – and Swank’s astonishing, bone-deep portrayal of Brandon Teena, a 21-year-old Nebraskan trans man gang-raped and murdered in 1993 by several male acquaintances when his transgender identity was revealed, was such an achievement.

Swank’s performance entailed, of course, the kind of all-in physical commitment that tends to wow Oscar voters – though it was a transformation dependent on inside-out understanding of the character rather than prosthetics. With cropped hair and a slouchy denim-and-plaid wardrobe emphasising the androgynous beauty in her tough features, she controlled the calculated, rangy swagger in her body language to tilt Teena’s masculine-feminine presence in either direction from scene to scene; her voice was similarly deepened and elasticised, its studiously maintained huskiness occasionally betrayed by spontaneous quivers and leaps when Teena’s true emotions surged.

Swank may not have been fully convincing as a man, but that was the point. Her Teena was inexperienced in the role himself, feeling his way through it as restless hormones rattled within him; he desperately wanted his gender to transcend performance, and Swank’s own acting was attuned to the difficulties of the transition. Audiences had rarely seen a performance along these lines, at a time when gender identity crisis was mostly presented in cinema in flatter dress-up terms, as opposed to a more interior study of a soul at war with a body. The Academy certainly hadn’t: awarding a supporting actress Oscar to Linda Hunt, adept but essentially stunt-cast in the role of a cisgender male Chinese photographer in The Year of Living Dangerously was as adventurous as they had previously been in the gender-confusion department. (The yellowface nature of the role, meanwhile, didn’t exactly make it a progressive milestone.)

The mainstream media conversation around transgender representation was, to say the least, a lot less evolved in 1999 than it was in 2019 – so much less so, in fact, that Swank using male pronouns to pay tribute to Teena in her acceptance speech actually sparked a flurry of public debate. (Teena’s mother JoAnn was unimpressed, insisting her child “pretended she was a man so no other man could touch her”.) Reports circulated of uncomfortable laughter and jeering at the film’s love scenes: the Chicago critic Nick Davis recalls that even Teena’s final rape and murder met with mirth at his youth-populated campus screening. Pierce’s film was uncompromising in its presentation of transgender identity as difficult, untidy, as internally confusing to the person inside the body as those outside of it. Swank’s performance was haunting in its self-alienation, and occasionally euphoric in its palpable sense of discovery – the actor’s, one sensed, as much as the character’s.

You need only compare Boys Don’t Cry to a more recent Oscar winner, Tom Hooper’s vapidly prettified The Danish Girl – in which Eddie Redmayne’s preening transgender artist Lili Elbe appears to find her identity through the simple thrill of rolling on a pair of stockings – to see how relatively unusual the complex, conflicted empathy of Kimberly Pierce’s film still is in mainstream LGBTQ cinema.

The Danish Girl came in for a lot of stick from transgender activists, many of whom protested the casting of a cis male actor in the role of a trans woman. Boys Don’t Cry was accused of exploitation in its day too, and has retrospectively received increased criticism over Swank’s casting: indeed, given the sensitivity and conscientiousness of Pierce’s perspective, it seems unlikely that the film would be equivalently cast today. The grievance is understandable: Swank managed to persuasively slip into a tortured skin and slip out of it again, winning a best actress Oscar that, by its very category title, fully affirmed her feminine identity and launched her career as an A-list leading lady who would win another Oscar (this time playing a cis woman, albeit in the butch realm of female boxing) five years later. The prizes for Boys Don’t Cry may have honored Brandon Teena’s legacy, but the happy ending was Swank’s, not his.

Yet it would be a mistake to politely sideline Boys Don’t Cry as another miscalculated, progressive-for-its-time casualty of cancel culture. Pierce’s film was hard enough to get made as it was, while the director has explained how she considered various actors across the gender spectrum before settling on Swank’s soulful, anxious imperfection in the part. Boys Don’t Cry was, for many viewers, an introductory text in the understanding of transgender identity; its deep, protective but unsentimental love for Brandon Teena helps it remain one today, however differently it might be made now. “We have come a long way,” Swank said at the outset of her Oscar acceptance speech, striking a note of proud defiance that didn’t immediately endear her to the Hollywood crowd that prefers gushing, weepy gratitude from its starlets. She was right, of course, however much further we’ve come since.