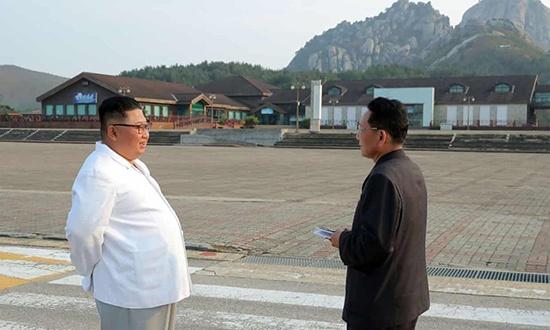 Justin McCurry and agencies  –   The Guardian

Kim Jong-un has ordered the demolition of “unpleasant-looking” South Korean facilities at the Mount Kumgang resort – a rare symbol of inter-Korean collaboration – and called for them to be replaced with “modern” buildings constructed by the North.

The North’s ruler said it was a “mistake” for the resort, on the east coast, to be regarded as the common property of two Koreas given its location on North Korean soil, according to the state news agency KCNA.

“Mount Kumgang is our land won at the cost of blood and even a cliff and a tree on it are associated with our sovereignty and dignity,” Kim said during a visit to the resort this week, KCNA reported, adding that he thought South Korean facilities were “reminiscent of temporary buildings at construction sites”.

South Koreans began tours to Mount Kumgang in 1998 but suspended them in 2008 when a female tourist from the South was shot dead by a North Korean soldier for reportedly wandering into a military zone.

The resort, built with investment from South Korean firms, has since hosted occasional reunions of families separated by the 1950-53 Korean war.

Pyongyang is reported to have been angered by South Korea’s failure to resume the tours, amid stalled negotiations over Pyongyang’s nuclear and ballistic missile programmes

The regime has pushed Seoul to ignore US objections to greater inter-Korean cooperation, but any South Korean investment in Kumgang would violate international sanctions imposed on Pyongyang.

Kumgang, along with the now-closed Kaesong industrial complex just north of the countries’ heavily armed border, was once seen as an example of what they could achieve despite military and political tensions.

The South Korean president, Moon Jae-in, has raised the prospect of resuming tours to Kumgang in an attempt to restart inter-Korean cooperation.

During their summit in Pyongyang in September 2018, Moon and Kim agreed to resume tours to Kumgang and reopen Kaesong “as soon as the environment is created”. In April this year, Donald Trump described Kumgang as an “unbelievable location” but said the time was “not right” to allow South Koreans to visit.

Despite his criticism of South Korean architecture, Kim said: “We will always welcome our compatriots from the South if they want to come to Mount Kumgang after it is wonderfully built as the world-level tourist destination.”

Kim also criticised his “predecessors” – believed to be a veiled reference to his father, Kim Jong-il – for encouraging the South to invest in Kumgang. “He made a sharp criticism of the very wrong, dependent policy of the predecessors who were going to rely on others when the country was not strong enough,” KCNA said.

The North Korean leader is promoting tourism as a key component of his policy of “self-reliant” economic growth. An editorial in the state-run newspaper Rodong Sinmun said: “The entire people should cherish the belief that self-reliance is the only way to live. There is nothing more foolish than to expect help from others today.”

Kim’s pitch for self-reliance came as the UN warned that food insecurity in North Korea was at an “alarming level”, with nearly 11 million people undernourished. Tomas Ojea Quintana, the UN’s independent investigator on human rights in North Korea said an estimated 140,000 children were suffering from “undernutrition”, including 30,000 who “face an increased risk of death”.