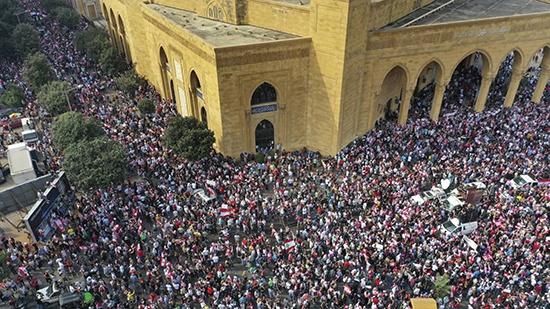 Prime Minister Saad Hariri’s rescue plan continues to be rebuked by demonstrators who cite their lack of faith and confidence in the ruling elite.

BEIRUT: Lebanese protesters have refused to let up as mass demonstrations enter their 6th day, calling on the resignation of the current government.

Prime Minister Saad Hariri’s rescue plan continues to be rebuked by demonstrators who cite their lack of faith and confidence in the ruling elite.

Hariri’s proposal calls for the privatization of a number of state-owned organizations, including mobile service providers, Middle East Airlines and Casino Du Liban.

Many skeptics criticized the proposal, saying it barely scratches the surface.

Although their numbers have visibly decreased, large swaths of people hit the streets for the second week calling for the dissolution of the Cabinet and the prosecution of the decades-old ruling class who they accuse of looting public funds.

On Monday night, a motorcade carrying Amal Movement and Hezbollah flags headed towards the protesters in Martyr’s Square was intercepted by the Lebanese Army, with a number of them arrested. Videos circulating on social media showed army officers confronting the group, which has sought to agitate peaceful demonstrations in the past.

The army, along with Hariri, has vowed to protect peaceful demonstrators from sketchy dissidents.

Banks have remained closed, with sources telling Annahar of a potential continued closure until “stability is reestablished.”

Schools and universities, meanwhile, are set to open Wednesday, according to a statement from Education Minister Akram Chehayeb.

Hariri is set to brief international envoys of the latest developments and the new economic plan which “seeks to slash the deficit to 0.6 percent,” according to his economic adviser Nadim Munla.

“This plan shows that we are serious about reforms and will appease the international community while meeting the requirements for CEDRE,” Hariri said Monday.

Meanwhile, Information Minister Jamal Jarrah ousted the head of the state-run National News Agency, Laure Sleiman, who has headed the organization for the past 11 years.

Sleiman reportedly holds close ties with the Lebanese Forces, who resigned from the current Cabinet two days ago at the height of mass protests.

Jarrah’s move comes into effect immediately with the NNA being now headed by Ziad Harfouch.

The state-owned Tele Liban has also come under fire after a group of independent artists stormed its headquarters for its lack of coverage of the protests.

“The channel belongs to the millions of people who are in the streets demonstrating,” actor Badih Abu Chakra said.