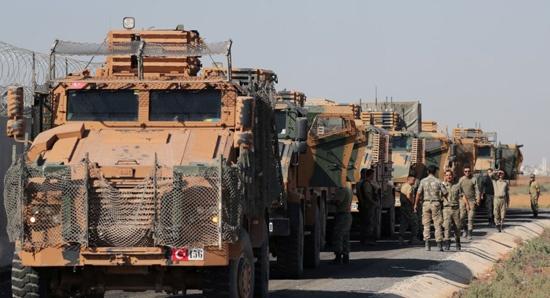 Following a negotiated settlement in Sochi earlier on Tuesday, Turkey’s Defence Ministry has announced that its Operation Peace Spring is complete.

“At this stage, there is no need to carry out a new operation,” the Turkish Defence Ministry said in a statement early Wednesday morning. Although a five-day ceasefire brokered with the US to permit Kurdish forces to withdraw from the operation zone had just expired, the office of Defence Minister Mevlut Cavusoglu noted that the withdrawal was complete.

On Tuesday, Erdogan had stated that “The promises given [by the US] were not fulfilled entirely. We will accept the results, take necessary steps. If we compromise, we will pave the way for terrorist organizations.” He promised to re-launch the offensive “even more strongly” if Washington should “break its promises” under the deal.

The Kurdish People’s Protection Units (YPG), US-allied militias that formed the core of the Syrian Democratic Forces (SDF), have been accused by Erdogan of supporting the Kurdish Workers Party (PKK), which is designated as a terrorist organization in Turkey. Earlier this month, Turkish forces launched ‘Operation Peace Spring’ in northeastern Syria with the ostensible goal of shutting down cross-border support between the groups, which they hoped to do by driving the YPG out of a 32-kilometer-deep ‘Safe Zone’. However, after days of fighting and worldwide outcry, US Vice President Mike Pence negotiated a 120-hour ceasefire to facilitate a Kurdish withdrawal beyond the Safe Zone.

However, the agreement hammered out between Erdogan and Russian President Vladimir Putin on Tuesday in the Russian city of Sochi made this a Russian and Syrian concern, with joint Russian-Turkish patrols in the area and the re-positioning of the Kurds beyond the 32-kilometer area to be safe from Turkish attack. Kurdish forces remaining in the Safe Zone will withdraw beyond that zone, and subsequent border crossings related to PKK support would fall under Russia’s responsibility, per the 1998 Adana Agreement.

“Good news seems to be happening with respect to Turkey, Syria and the Middle East,” US President Donald Trump tweeted, just moments after the Turkish Defence Ministry’s statement.

Trump’s withdrawal of US troops from the Syrian border helped pave the way for the Turkish offensive, which Washington and Ankara had been coordinating since August. However, Trump first announced his intention to remove the roughly 1,000 US troops from Syria in December 2018, once Daesh* was defeated in the area. He has faced wide criticism in the US press for “abandoning” the US-allied Kurdish militias.