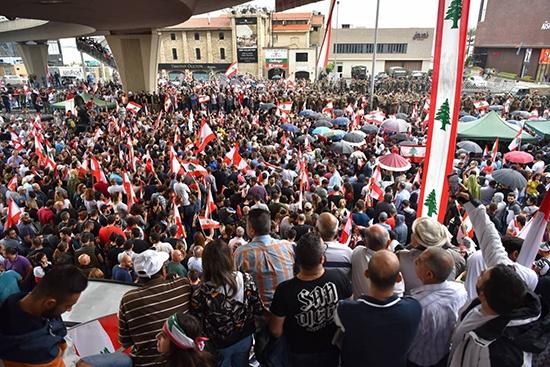 After almost a week of radio silence, President Michel Aoun is set to address the nation on Thursday at 12 pm.

BEIRUT: Protests maintained their momentum for the seventh consecutive day, despite heavy rainfall and an attempt by the Lebanese army to clear the way along Lebanon’s main highway.

As noon approached, hundreds of soldiers descended upon Zouk and Jal el Dib to dispose of the many installations set up in both locations. They first encountered a relatively small number of protesters, which rapidly grew to outnumber the soldiers in a matter of minutes.

The army was quick to abandon its plan as crowds gathered alongside them, singing the national anthem, handing them flowers and bringing a number of soldiers to tears.

Lebanon’s economic activity has been stifled ever since mass protests broke out last week, triggered by a proposed tax on Whatsapp calls. In their overwhelming majority, protesters gave demanded the resignation of the current government, who they blame for mismanaging an economic meltdown that has been brewing since the conclusion of Lebanon’s civil war in the early ’90s.

After almost a week of radio silence, President Michel Aoun is set to address the nation on Thursday at 12 pm.

He, along with the decades-old ruling class, is facing immense pressure amid accusations of corruption and mismanagement of public funds.

Both Mikati and the bank denied the accusations, with Mikati saying these charges are politically motivated because of his positions in support of the premiership post under the Taef Accord.

The charges also target Mikati’s son Maher and brother Taha and would be referred to a judge for investigation.

Fearing a potential bank run and increased demand for dollar liquidity, Banks will remain closed on Thursday until “the general situation stabilizes,” its association said.

Throughout the day, Prime Minister Saad Hariri held talks with officials, including Central Bank Governor Riad Salameh. Hariri also met with members of the Progressive Socialist Party, which seemingly changed course on its resignation from the Cabinet.

Protests remained relatively peaceful across Lebanon, with the exception of Nabatieh in south Lebanon, where a scuffle broke out between municipality police attempting to open a blocked road. At least 15 protesters were reported injured.

Touching on the protests for the first time, the U.S seemingly threw its support behind the demonstrations, saying that Lebanese people are “rightfully angered” with their government over their refusal to tackle corruption, according to senior US State Department official.

The head of Lebanon’s Maronite Catholic community Cardinal Beshara Rai also called on Aoun to begin talks with politicians and take necessary actions in response to the peoples’ demands.

“What Lebanon is witnessing is an exceptional and historical popular uprising that calls for taking historical positions; bandaid solutions do not work anymore,” he said.

Ministers on Monday agreed on a “rescue plan” to dig Lebanon out its hole without imposing new taxes.

Hariri’s proposal calls for the privatization of a number of state-owned organizations while requesting massive contributions from commercial banks, estimated at around 3.4 billion dollars, coupled with a lower interest rate on its debt.

In response, credit agency Moody’s warned that the “government’s plan to force banks to accept a lower interest rate on its debt could compound pressures on the currency peg and Lebanon’s debt sustainability over the medium term.”

Japan job availability up, unemployment down in January 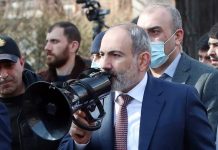