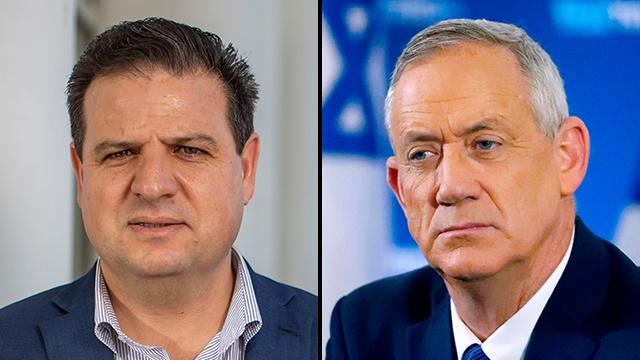 Opinion: Tasked with forming the next government, the Blue and White leader must break one of the party’s campaign pledges to prevent a third round of elections in one year, and repairing Israeli society takes precedence over inclusion of Arab factions

The question of whether Israel should have a coalition based on support from the Joint List, even if it is from outside the government, has been tying the heads of Blue and White party in knots in recent weeks.

But this question has gone from theoretical to practical now Blue and White leader Benny Gantz has officially received the mandate to form a government.

Two surveys conducted this year both show that a clear majority of the Arab public supports some form partnership in an Israeli coalition government.

The problem remains the colossal gap between the will of the Arab public and the will of its leadership. The heads of Blue and White are not the only ones being put to the test – Joint List Chairman Ayman Odeh and co. are also in the spotlight, with declarations from over the past decade showing that they are no coalition partners.

When Yair Lapid’s Yesh Atid Party won a surprising 19 seats in the 2013 elections, he could have led a bloc of 59 seats – not quite an obstructive bloc, but almost.

But he announced he would not form a bloc with “the Zoabis,” referring to former Arab MK Haneen Zoabi of the anti-Zionist Balad Party, who was accused of acting against the State of Israel and supporting terror.

Instead, Lapid preferred a coalition with Prime Minister Benjamin Netanyahu and his Likud Party, in which he became finance minister.

Lapid made it clear that he wasn’t ruling out all Arabs, just those like Zoabi who acted against the existence of the state. And while Zoabi is no longer in the Knesset, Balad hasn’t changed.

Almost every possible scenario for a future government is met by pundits saying – and rightly so – that the chances of it being formed are slim. But surely one of these scenarios must come to pass, despite unconvincing odds.

And out of all the options, a minority government supported from outside by members of the Joint List, even if not all of them, is not the least likely scenario.

But if all parties stick to their election pledges, the worst scenario will become a reality and Israel will undergo its third round of elections in less than a year.

Therefore, Blue and White must sacrifice one of its two core principles in order to form a coalition – either team up with Netanyahu despite the party’s “just not Netanyahu” policy, or a partnership with the Joint List, despite promising it wouldn’t happen.

Blue and White acts under the banner of bringing back sanity into politics and reducing polarization in society, but establishing a government with the support of provocative lawmakers such as Joint List’s Ofer Cassif would only make things worse and Israel would become even more polarized.

A partnership with Netanyahu, following a combination of the coalition outlines proposed by President Reuven Rivlin and Yisrael Beytenu Chairman Avigdor Liberman, would indeed be a retreat from an explicit promise, but choosing between an election promise and the public interest, the choice must be a unity government.

Netanyahu will get several additional months as prime minister, but it’s less bad than a minority government, which itself is less horrible than another round of elections.

A coalition partnership with Arab factions can wait, mending the tear in Israeli society is far more urgent and important.