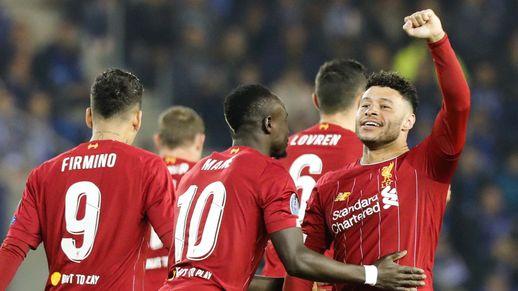 Sporting Life · Columnist
Alex Oxlade-Chamberlain scored twice as Liverpool won their first away game in the Champions League group stages in two years with a 4-1 victory at Genk.

Oxlade-Chamberlain scored one in each half, before late goals from Sadio Mane and Mohamed Salah sealed the win, and Stephen Odey netted a deserved reply for an entertaining Genk side.

The Liverpool midfielder was starting his first game in the competition for 18 months as Jurgen Klopp’s side looked to end the strange run of away struggles in the group stages of a tournament they won last season in their second straight final.

And it didn’t take the former Arsenal man long to make an impact as he fired a low drive into the bottom corner after just a couple of minutes of the game had gone in Belgium.

The hosts really troubled Liverpool on the break though, even having a goal ruled out by VAR for offside, and it was not until Oxlade-Chamberlain curled in a fantastic second with the outside of his right foot that the points finally looked safely tucked away.

Mane dinked in a wonderful third goal after a flowing move involving all three of Liverpool’s front men, Roberto Firmino supplying Salah who then showed a expert touch to put through Mane.

Salah then coolly slotted home a fourth but Genk deserved a goal for all their endeavour and they got one just before the end when Dejan Lovren was robbed in possession and Odey eventually turned a fired beyond Alisson.

Group E as it stands

Liverpool now sit in second place in Group E behind Napoli after the Italian side emerged with a 3-2 win from their visit to Red Bull Salzburg in the other game of the night.

The two fixtures on the night are reversed for the next matchday as Genk visit Liverpool and Salzburg travel to Naples, before what could then be a crucial meeting between Liverpool and Napoli at Anfield.