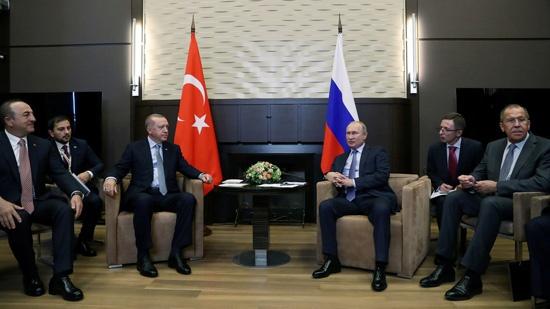 Turkey will be monitoring the process of YPG/PKK terrorists’ withdrawal from northeastern Syria and will not hesitate to take the necessary steps if Russia does not meet its commitments, Turkish President Recep Tayyip Erdoğan has said.

“There will be no change in the steps we would need to take if promises made in the agreements with both U.S. and Russia will not be fulfilled. For the U.S., we will determinately carry out the same operation. For Russia, Mr. Putin talked very decisively. He said, ‘We will definitely eliminate [YPG terrorists] from here,’” Erdoğan told journalists on his way to Turkey from Russia.

The president paid a one-day visit to Sochi, Russia and met with his Russian counterpart Vladimir Putin. The two held a lengthy meeting on Oct. 22 and agreed on a 10-point memorandum on Syria.

While Putin dubbed the accord as “very important if not crucial,” Erdoğan hailed it as “historic.”

“Now that [Putin] made this promise, if [YPG] is not eliminated, our duty starts. Nothing will change. We will monitor the process,” Erdoğan said.

Under the Turkish-Russian deal, the YPG has 150 hours starting at noon on Oct. 23 to withdraw from almost the entire northeastern border of Syria, from the Euphrates river to the Iraqi border.

Russia and the Syrian regime’s forces would move in to ensure that the YPG pulls back 30 kilometers (about 20 miles) from the border. The 150-hour timespan expires on Oct. 29.

After the schedule for the withdrawal concludes, joint Turkish-Russian patrols would begin along a 10-kilometer-(roughly 6 miles) wide strip of the border.

The only exception for the joint patrol will be the Qamishli town at the far-eastern end of the border.

On the reasons of the Qamishli exception, Erdoğan told journalists that there is Russian and regime forces’ presence in the town, thus they have “no desire to face off against Turkey.”

“We did not want that too. So, we did not initiate such a thing at Qamishli,” he said.

When asked where the YPG will pull back after the withdrawal, the president said they will move to the southern parts of Syria.

Erdoğan also conveyed that during his meeting with Putin, the possibility of YPG terrorists disguising among the Syrian Arab Army came up. The Russian leader said they will not allow this, Erdoğan said.

“We will be following this,” he added.

The deal on Syria also put emphasis on the Adana protocol, signed between Syria and Turkey in 1998, while stressing that both Turkey and Russia will “ease its implementation.”

When asked if “making easy” means an upcoming change in the protocol, the president said the Syrian regime had some initiatives “from time to time,” yet no such issue is in question.

The president also said that Turkey’s presence in the Tal Abyad and Ras al-Ain towns of northern Syria is not permanent. He added that the “real owner is Syria.”

“We are not an army of occupation. We do not have such a characteristic. The real owners of here is the 3.6 million refugees [in Turkey]. Of course, if they return to these places, voluntarily, they can go on with their lives in their own lands,” he said.

When asked if the situation in Ain al-Arab was tackled during the meeting with Putin, Erdoğan said U.S. and Russia had different approaches on the Turkish military presence in the city.

“Russia had some invitations to us on our entrance to Ain al-Arab. But the U.S. had the opposite approach. This approach is the same as it was in the Obama administration,” he said, accusing the former U.S. president of providing arms and weapons to Kobane.

“If today, there are 350,000 Kobane residents in our country, the one responsible for this is Obama. Those saying, ‘Turkey does not have any Kurds from Syria’s north’ are lying,” he said.

Erdoğan also stressed that Turkey’s fight is against terrorists, not Kurds. The president conveyed that he told the same thing to his Russian counterpart in their meeting.

“I said, ‘This is disrespectful to our Kurdish brothers and sisters. We are fighting against terrorists; the PKK/YPG. The race or religion of terrorists do not matter. Terrorists are terrorists,” he said.

He said that the ISIL terrorist group also has members of European origin. “This should not be put in the boundaries of ethnic struggle,” he said.

Erdoğan also underlined that world powers fail to cooperate on the financial side of the to-be established safe zone, for the voluntary settlement of Syrian refugees in Turkey.

The president said that Turkey wants to initiate the construction works after the operation, yet no other country stepped in for the finances.

“They said, ‘We gave that financial support to Lebanon and Jordan.’ We did not receive any affirmative response from any of [the countries],” he said.

Erdoğan conveyed that another solution on the financial assistance for the safe zone settlements is to call on the United Nations for the International Donor Conference on Syria.

“I do not know if we can achieve a result from this. We will convey this to the U.N. and want this to spread,” he said.

The president also said that he and U.K. Prime Minister Boris Johnson had a phone call a couple of days ago, offering a joint meeting with French President Emmanuel Macron and German Chancellor Angela Merkel.

Erdoğan said the meeting can take place before the leaders of a NATO summit on Dec. 3-4 or at the meeting.

“They initially offered London [for the meeting], but I said it can be in Istanbul or bordering provinces like Gaziantep or Şanlıurfa,” he said.

Erdoğan added that he will meet with his U.S. counterpart Donald Trump in the U.S. on Nov. 13.