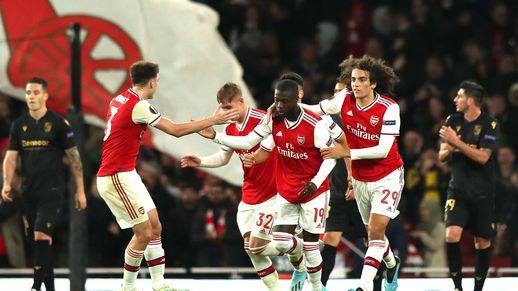 The Gunners had to twice come from behind as Portuguese outfit Guimaraes deservedly went ahead twice with goals from former Spurs man Marcus Edwards and Brazilian Bruno Duarte.

Gabriel Martinelli, one of the few players to impress in the first half, drew Arsenal level after 32 minutes only for them to go behind again just four minutes later to go in at half time 2-1 down at a stunned Emirates.

Unai Emery made 10 changes from the team that lost at Sheffield United on Monday, with the continued absence of Mesut Ozil – who hasn’t made the squad in a month – again making the pre-match headlines.

The lack of creativity and control against lowly Portuguese opposition made the absence of Ozil even more puzzling after a first half devoid of any attacking intelligence from the hosts.

Daniel Ceballos and Matteo Guendouzi came on at the start of the second half as Arsenal improved, but they still looked like suffering an embarrassing defeat until £72m man Pep entered the fray with 15 minutes left.

Pep fired a free kick into the bottom corner with ten minutes left to play, before finding the opposite corner in the second minute of stoppage time to get the Gunners out of jail.