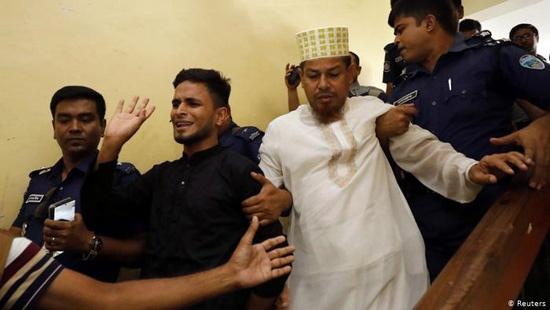 Nusrat Jahan had reported the principal of a religious school for attempted rape, but was then burnt alive for not withdrawing the complaint. Her death sparked public outrage and mass demonstrations.

A court in Bangladesh sentenced 16 people to death on Thursday for the murder of Nusrat Jahan. The 18-year-old was set on fire after refusing to withdraw a sexual harassment complaint against the head teacher of the seminary she attended.

The killers poured kerosene over Jahan and set her on fire on the roof of her madrasa in April in the southeastern district of Feni.

She suffered severe burns and died in hospital five days later on April 10. Siraj Ud Doula, the head teacher, was among those sentenced to death.

“We are happy about the judgment,” Hafez Ahmed, a public prosecutor, told reporters after the court verdict.

Defense lawyers said they would appeal against the ruling in the high court. The case was fast-tracked with the hearing taking only 62 days.

Jahan’s murder sparked public outrage and mass protests calling for her killers to be brought to justice. Bangladesh’s Prime Minister Sheikh Hasina had met the victim’s family and vowed to prosecute all those involved.

The incident also drew attention to an alarming rise in sexual harassment and sexual violence cases in the South Asian country of 165 million people. After the murder, Bangladesh ordered some 27,000 schools to set up committees to prevent sexual violence.

Observers say the murder exposed a “culture of impunity” surrounding sex crimes against women and children. Prosecutions are also rare in cases of rape and sexual assault.

“We have strict laws in Bangladesh, but no implementation. Justice is delivered in only 4% of cases. There is a prevailing culture of impunity. That is why rape cases are increasing every day,” Alena Khan, a lawyer based in Dhaka, told DW in July.

A report published recently by the “Bangladesh Mahila Parishad” (BMP) — Bengali for Bangladesh women’s council — estimates that 731 women and children were raped in the first six months of 2019.

BMP came up with these figures by counting incidents reported in 14 national newspapers during the first half of the year.

But observers say the real number is likely to be far higher, pointing out that many victims do not report sex crimes due to the pervasive fear of being blamed for the rape or ostracized and disowned by their families.

Another problem is the country’s ultra-conservative society, where a victim of sexual violence is often viewed as a person without honor and stigmatized by the community.