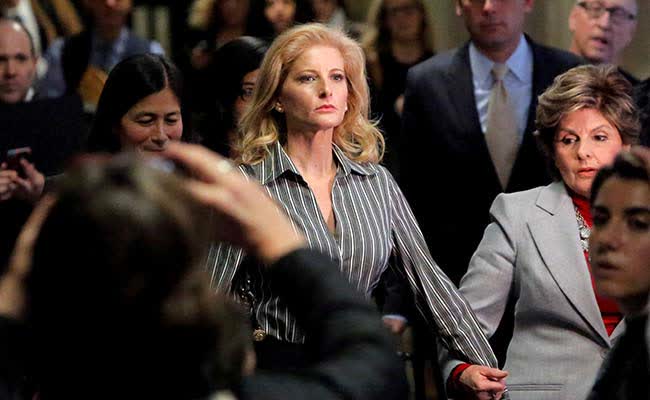 This case is emerging as one of the more pressing legal challenges to Donald Trump who is facing an impeachment inquiry on the Hill among other lawsuits.

Excerpts of Donald Trump’s private calendar from a dozen years ago made public on Thursday appear to show Trump was at a Beverly Hills hotel around the same time a former “Apprentice” contestant alleges he assaulted her there.

Email exchanges from 2007 also released Thursday show that the woman, Summer Zervos, had sought a lunch meeting with Trump in New York around the time she claims he kissed her inappropriately in that city.

The calendar records and email correspondence came to light in court filings related to Zervos’ ongoing defamation lawsuit against Trump in New York state court. Zervos is one of about a dozen women who accused Trump of sexual misconduct shortly before the 2016 election, and her case could reach its conclusion before voters return to the polls next year.

Trump has denied accusations of sexual impropriety and said he never even met Zervos at the Beverly Hills Hotel. “To be clear, I never met her at a hotel or greeted her inappropriately a decade ago,” Trump said after she made her accusation.

But Zervos’ lawyer said the documents, and others the Trump Organization has held back from public view, back up her client’s claims.

Zervos’ “account of the underlying sexual assaults has now been corroborated, in close detail, by documents produced from [Trump’s] own files,” Zervos’ lawyer Mariann Wang wrote in a memo filed on Thursday.

Trump’s lawyer in the case, Marc Kasowitz, told the Associated Press Thursday that Zervos’ claims are “entirely meritless and not corroborated by any documents.”

Trump called Zervos and other women who have made accusations against him “liars,” prompting Zervos to sue him for defamation.

The documents released Thursday were made public as part of an agreement between Zervos’ and Trump’s legal teams. The filings include some of the hundreds of documents produced by the Trump Organization in the discovery phase of the lawsuit that the company had deemed confidential.

Among the new documents are email correspondence between Zervos and Trump’s secretary, Rhona Graff, from the fall of 2007, where Zervos asks to meet Trump.

“I Will be in New York Late November, and would like the chance to take Mr. Trump to lunch,” Zervos wrote to Graff on Oct. 1, 2007. “I simply think a lot of him and would look forward to visiting with him.”

“Why don’t we keep it casual,” Graff responded. “Call me when you are in town, and you can certainly pop over if it’s convenient.”

Zervos, who has said she hoped to work for the Trump Organization and wanted professional advice, has said she visited Trump in his office in Trump Tower in New York.

“When I arrived he kissed me on the lips,” Zervos said in a 2016 statement. “I was surprised, but felt that perhaps that was just his form of greeting.”

As the meeting was wrapping up, Zervos said Trump kissed her again and she was “upset” by this and told friends and family.

Zervos has said she later met Trump for a lunch meeting at the Beverly Hills Hotel, when she said the unwanted fondling occurred. Despite the nature of the encounter, she said, she voluntarily met him again the next day at Trump National Golf Club in Rancho Palos Verdes, Calif.

The calendar records provided by the Trump Organization show that Trump left Las Vegas on Dec. 21, 2007, arrived in Los Angeles, and went to the Beverly Hills Hotel that afternoon, along with his bodyguard Keith Schiller. The entry for the next day says he visited the “Trump National Golf Club” in the morning before departing Los Angeles the following day.

Trump’s lawyers have tried to block Zervos’ suit, arguing that the president is immune from such state court lawsuits. But in March, a New York appellate court ruled that Trump had to face the defamation lawsuit.

On Friday, a judge set a deadline of Dec. 6 for depositions, meaning Trump may have to make a statement or answer questions under oath. Trump’s lawyers have signaled their intent to appeal.

The discovery phase of the lawsuit is ongoing.

The Zervos case is not the only defamation lawsuit Trump has faced as president. Adult-film actress Stormy Daniels had filed a separate suit against Trump, arguing that he defamed her when he suggested she had lied about being threatened to keep quiet about their alleged past relationship. That lawsuit was dismissed by a federal judge last year.