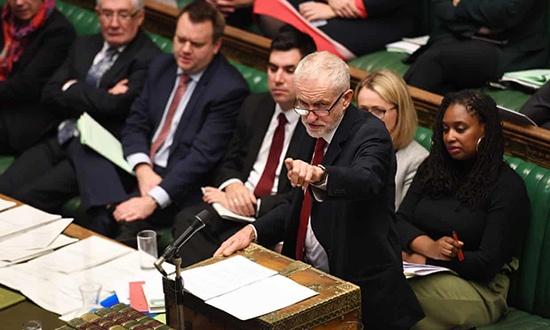 MPs may be told to abstain in Monday’s vote, with Jeremy Corbyn to make call on Friday

Jeremy Corbyn in parliament on Tuesday. He said he wants to make sure ‘no deal is off the table’ before backing an election. Photograph: Jessica Taylor/UK Parliament/EPA

Labour appears poised to block Boris Johnson’s offer of a pre-Christmas general election on 12 December by telling MPs to abstain in Monday’s vote.

The party previously said that it would back an early election when a no-deal Brexit scenario could be firmly ruled out, and has twice rejected attempts by Johnson to go to the polls before 2022.

But Jeremy Corbyn told the BBC he still wants to make sure a no-deal Brexit is taken off the table. It is understood that he will make a final decision on how to instruct MPs once the EU27 have confirmed what extension the UK will be offered.

One Labour MP said they had been told they could abstain or vote against the motion for an election.

Corbyn said: “No deal is a threat that Boris Johnson has been using all along, and indeed it’s included in his legislation that’s before parliament at the moment, the legislation that he’s paused.

“I want us not to crash out of the EU because of all the damage it will do to jobs across the country. We’ll know tomorrow [Friday] what the extension will be and I can answer that question tomorrow. What I’m saying now is, take no deal off the table.”

The prime minister said an election was needed to try to help the country move on after parliament voted for his Brexit deal but rejected the timetable for scrutinising it and asked for more time.

Johnson’s offer is to allow MPs to debate his EU withdrawal bill agreement until 6 November. He will ask them to vote in favour of this option on Monday with a motion under the Fixed Term Parliaments Act.

Labour MP Barry Sheerman said the party would not be bounced into an election and the earliest they should consider is next spring. He said: ‘“I think it’s crazy to agree to this. This is a usual Boris tactic of trying to bounce us into a Brexit election and we aren’t buying that. I’d want a post-Brexit election on the economy and health and everything that really matters.

“We had a meeting of the parliamentary Labour party two weeks ago where right across the range of opinion in the party we said we wouldn’t support an early election.”

However, Momentum, the campaigning group that supports Corbyn, said it would back an election now, though it was not specific about whether it wanted MPs to back Johnson’s offer.

Laura Parker, Momentum’s national coordinator, said: “Bring it on. Our campaign will see tens of thousands of people talk to millions of voters across the country. In 2017 Momentum’s campaign swung key seats for Labour. This time we’re going to run the biggest people-powered campaign the country has ever seen.”

Corbyn denied that Labour’s position on a general election was confused, given that they have consistently said they want voters to go to the polls to oust the Tories.

He said: “We are not resisting the chance to have an election. We want an election because we want to take our case to the people of this country, but we do not want this country to be in any danger of crashing out of the EU without a deal because of all the damage that will do to jobs, services and trade all over this country.”

He said rather than keeping Johnson in office by not backing an election, Labour was holding him to account and continually defeating the government in parliament.

The Labour leader also declined to answer questions on recent polling for Labour, which puts them behind the Tories.

Asked if he was against an election because of concerns that he would lose, he said: “I don’t want to go into an election knowing that no deal has been operated. I want to stop no deal, then [have] an election.”

In the hours leading up to Johnson’s offer, Corbyn’s most senior ally, the shadow chancellor, John McDonnell, was upbeat about the prospect of a winter election.

At lunchtime on Thursday, McDonnell said he was ready for an election “whenever”, but the party had been trying to pressure the government into giving them more time to scrutinise the Brexit deal to make sure there were better protections for the economy, jobs and living standards.

He also appeared to suggest that he wanted to see an amendment added that would enable the deal to go to a public vote. “We’re being accused all the time trying to prevent the Brexit process happening. We’re not,” McDonnell said. “We’re just saying we want a proper process, but that must include the ability to put amendments up and an amendment up to enable it to go back to the people.”

McDonnell added that he was not worried about Labour’s chances or the unusual time of year. “I want a majority Labour government and I think that’s what we’ll get. It’s a bit cold. Anything could happen … I’ve ordered a winter coat.

“My preference is to get an agreement in which we could consider the bill properly, but I’m always up for an election whenever it comes and I’ve got my winter coat ready.”