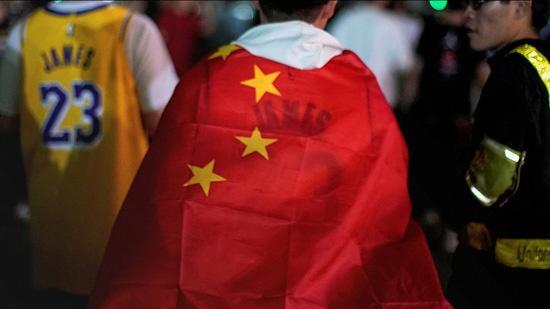 US corporations “should stand up for American values,” but instead they are “wholly owned” by the “authoritarian regime” in China, Vice President Mike Pence said in a speech, singling out Nike and the NBA for criticism.

China has been trying to export its domestic censorship by playing on corporate greed and pressuring corporate America to toe the party line, the VP argued, in a speech on US-China relations on Thursday. As examples, he brought up thRTe basketball league penalizing a manager after comments made in support of protesters in Hong Kong, at which Chinese authorities were offended.

“Some of the NBA’s biggest players and owners, who routinely exercise their freedom to criticize this country, lose their voices when it comes to the freedom and rights of other peoples,” Pence said.

In siding with the Chinese Communist Party and silencing free speech, the NBA is acting like a wholly owned subsidiary of the authoritarian regime.

Pence also went after the sportswear company Nike, which famously partnered with social justice activist Colin Kaepernick for a domestic advertising campaign about the importance of values.

“Nike promotes itself as a so called ‘social-justice champion,’ but when it comes to Hong Kong, it prefers checking its social conscience at the door,” the VP said.

Embracing censorship “is not just wrong, it’s un-American,” he said. Instead, he argued, US corporations “should stand up for American values, here at home and around the world.” It is unclear whether the use of “stand up” was deliberate here, given the NBA and Nike’s support for athletes who kneel in protest at the US national anthem.

President Donald Trump’s administration has taken a hard line on China over trade, and Pence explained that they seek a “fundamental restructuring” of Washington’s relationship with Beijing. Using the phrases familiar to Cubans, Iranians, Venezuelans and every other country targeted by the US for regime change, he also said that Washington has no problem with the Chinese people, only their government.

Pence also admitted that the US had sought to “transform” China into a “free and open society” through trade, but that this approach did not work, and held up democracy as practiced in Taiwan – an island claimed by China but ruled by the defeated nationalists who escaped the mainland in 1949 – as a “better path for all Chinese people.”

While Pence talked about “mutual respect” in US-Chinese relations, he did not explain how US support for separatism in Hong Kong and Taiwan would be respectful to Chinese values – namely, territorial integrity.

Much of the destiny of the 21st century will hinge on the US relationship with China.

After all that, Pence said that the US wants to continue doing business with China, and relying on Beijing’s cooperation in denuclearizing North Korea and enforcing US sanctions against Iran – something China has no obligation to do.