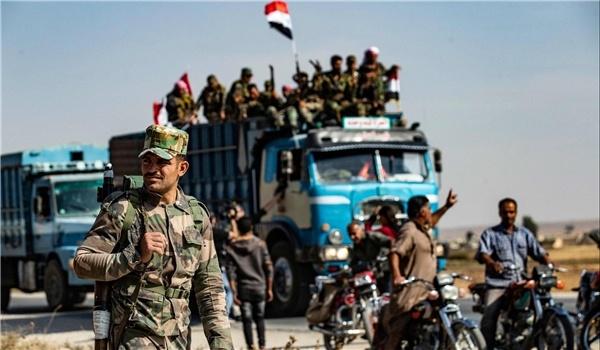 TEHRAN (FNA)- The Syrian army dispatched heavy military equipment and weapons to Southern and Southeastern Idlib after the terrorist groups refused to withdraw from the demilitarized zone.

“The Syrian army has in the past few days sent heavy military equipment to Southern Idlib, including several tanks, personnel carriers, long-range and short-range artilleries and other military equipment, to be deployed in all fronts in Southern and Southeastern Idlib,” a field source was quoted as saying by the Arabic-language website of Sputnik on Thursday.

He added that the equipment were deployed in the region to keep the Syrian army prepared for any possible emergency situation, specially given the fact that the terrorist groups, including al-Nusra Front (Tahrir al-Sham al-Hay’at or the Levant Liberation Board) and Ajnad al-Caucasus, have reinforced their positions and misused the ceasefire to transfer weapons and militants to the contact lines with the Syrian army.

Tahrir al-Sham has recently reinforced its military positions in the demilitarized zone in Idlib and its militants have been equipped with advanced weapons and military equipment despite Ankara’s claims about implementing the Sochi Agreement.