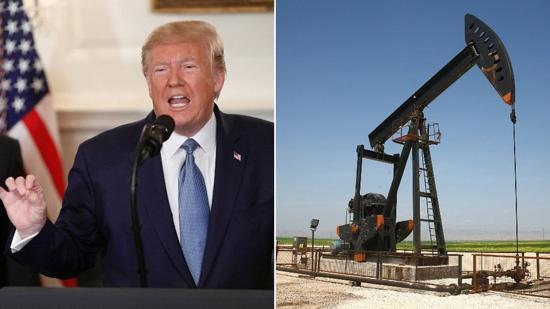 US President Donald Trump’s baffling comments about keeping some troops in Syria to “secure the oil” suggest a confused, contradictory – and ultimately self-defeating – policy.

Earlier this month, Trump appeared to have used the impending Turkish invasion to deftly cut the Gordian knot of US presence in Syria, citing it as a pretext for pulling out troops that weren’t supposed to be there to begin with – and had long since completed their mission in any case.

He stood by that decision even as the Washington establishment shrieked about “betrayal” of allied Kurdish militias, and was vindicated when a deal worked out by Moscow and Ankara created a solution that benefited everyone – except those in the US still committed to regime change in Damascus, that is.

While Trump has not officially renounced the “Assad must go” policy of his predecessor, the pullout was supposed to be the end of it in practice. The sudden talk about Syrian oil fields, however, suggests that someone from the “swamp” managed to persuade the president to keep one foot in the endless foreign wars he has pledged to end.

“We want to keep the oil,” Trump said this week, to the confusion of everybody. Attempting to explain on Thursday, he said the oil fields were “held by [Islamic State] until the United States took them over with the help of the Kurds. We will NEVER let a reconstituted ISIS have those fields!”

Except there is no sign of IS getting reconstituted or rising from the ashes – and the Syrians rightly regard any US attempt to seize the oil fields as theft and piracy.

Much has been made of Trump’s own comments from 2011 about the US seizing Iraqi oil as “reimbursement” for the 2003 invasion, but that does not appear to be the case here. Ironically, Trump has boasted recently about his administration making the US into a net exporter of oil and gas, so it does not need the Syrian oil.

The oil fields in question were traditionally used to meet domestic demands and are too small to be interesting to Washington in terms of profit, journalist and orientalist Andrey Ontikov told RT.

One clue might be in the words of US Defense Secretary Mark Esper, who said the purpose of keeping the troops in Syria is to “deny access to [IS] and any other groups that may want to seek that revenue to enable their own malign activities.” (emphasis added)

This phrasing is a dead giveaway that the oil gambit is not about IS, but about blocking the government in Damascus from using its own natural resources to rebuild. Already under a blockade by the US and its EU allies, Syria desperately needs the oil to help its people survive the winter. “Malign activities” is a phrase Washington often uses in reference to Iran, a strategic partner and ally of the Syrian government.

If that sounds to you like a policy designed by someone from the Washington establishment, which has dreamed of regime change in Damascus for the past eight years and greeted Trump’s decision with wailing and gnashing of teeth, you are not alone. NBC News has even named a possible culprit – retired General Jack Keane, a Fox News military analyst, who they say gave Trump a briefing about the oil fields.

Yet Keane has been against any US withdrawal from Syria or the Middle East in general, and Trump has ignored his advice in the past in favor of other Fox personalities – such as Tucker Carlson and his frequent guest, retired US Army Colonel Douglas Macgregor, who both approved of the Syria pullout.

Critics of the purported plan point out that its illegal. So was the US presence in Syria, mind you – and their transit through Iraq as well, according to Baghdad, or the 2003 invasion, or… well a number of other things, too long to get into here. Illegality has never stopped Washington, convinced as it is of American exceptionalism.

Yes, the oil gambit would be a crime – but worse than that, it would be a mistake. By leaving troops in Syria to “keep the oil,” whether for or from someone, Trump would be snatching defeat from the jaws of victory – and for what? Appeasing the very same Washington Swamp he literally just denounced as “human scum”?

Things have had a way of working out in Trump’s favor, and he has described himself as a “stable genius.” Yet there is nothing clever or genial about this, frankly stupid, plan. As he himself would say, let’s see what happens.

Turkey is increasingly becoming a threat to Israel

US Weaponises Everything From Hong Kong to Huawei to Exert Pressure on Beijing, China Experts Say