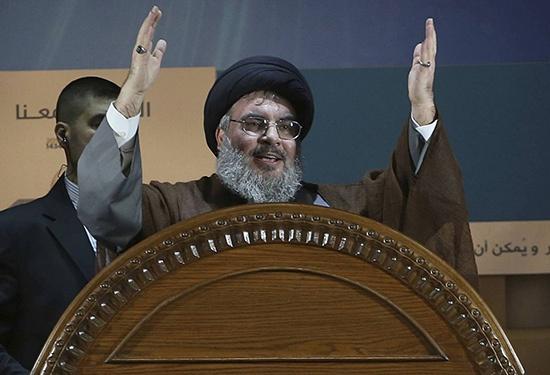 A group of Hezbollah supporters have wreaked havoc in Riad al Solh Square in Beirut, minutes before Nasrallah is set to address the nation for the second time this week.

BEIRUT: The leader of Lebanon’s Iranian-backed Hezbollah called on his supporters to leave anti-government protests to avoid friction and seek dialogue instead, warning of the dangers of a political vacuum gripping the country.

Hassan Nasrallah spoke Friday shortly after his supporters clashed with protesters in central Beirut, rejecting that demonstrators equate him with corrupt politicians.

Nasrallah said the protests in Lebanon are no longer spontaneous and popular but have become politicized, adding that political rivals who are critical of his group’s political line are manipulating the protests.

He said the protests have been exploited by international and regional powers who are also against his party, in reference to widening U.S sanctions amid tension between Washington and Tehran.

“What started as a popular expression of anger against corruption and deepening economic crisis is being steered by some political groups who are financing it and who are as corrupt as those the protesters are against.”

He also expressed concern at the small Mediterranean country, which is home to over 18 religious sects, could return to a civil war, conjuring fear of the country’s war that lasted 15 years and ended in 1990.

Echoing calls made by President Michel Aoun earlier, Nasrallah welcomed dialogue with representatives of the movement to voice a “clear set of demands.”

The movement, which began over eight days ago, has yet to unify and present a tangible agenda to the current government. Instead, it has continued in a decentralized fashion with protesters of all walks of life voicing their discontent on national TV.

In the lead up to Nasrallah’s speech, clashes erupted between riot police and a group of Hezbollah supporters

The group wreaked havoc in Riad al Solh Square in Beirut, shortly before Nasrallah was set to address the nation for the second time this week.

Dozens of men descended upon Marty’s square before making their way to Riad al Solh, attacking peaceful protesters whom they accuse of insulting their patron.

“We do not accept anyone insulting Sayyed Nasrallah,” one man told LBCI.

Old men and women were not spared, as a massive brawl erupted between the group and riot police who have attempted to maintain calm. Despite their efforts, rocks, sticks and bottles rained down on them and peaceful protesters with a number of injuries reported.

“This is a peaceful demonstration, it is unbelievable that these thugs are attacking us and riot police alike,” a clearly shaken man told MTV.

The Hezbollah leader, who had evaded the anger of demonstrators up to this point, has not been spared this time around, with protesters unafraid to lump him into the ruling class that they accuse of leading Lebanon down a treacherous path.

A Reuters photographer was also attacked with the group destroying their camera according to LBCI.

Following the conclusion of his speech, the group promptly left Riad al Solh square, with a massive crowd gathering in Dahye, a Hezbollah stronghold on the outskirts of Beirut.

Despite government promises of reforms, the leaderless protesters have dug in, saying the country’s incumbent officials are corrupt and must go.

The unprecedented mass protests come amid a deepening economic crisis in Lebanon. Banks have remained closed all week, electing to await stability before resuming operations.