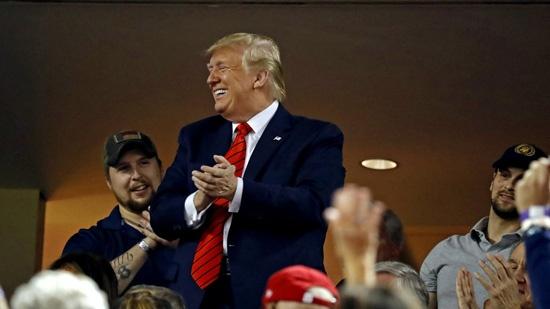 US President Donald Trump stole the limelight at Game five of the Word Series after the crowd greeted him, his wife and several GOP lawmakers with angry boos, followed by ‘lock him up’ chants.

Loud boos and ‘lock him up’ chants broke out at the baseball game between Washington Nationals and Houston Astros at Nationals Park on Sunday.

The commotion happened after the US leader, who rose to his feet when a shot of US troops was broadcast during a brief intermission, was introduced to the stadium and shown on the giant videoboard.

As soon as the footage appeared, angry boos drowned out cheers for the military. Trump was apparently taken aback by the stadium’s reaction and quickly turned to his wife. It did not take him long to regain composure, however, with both Melania and him sporting bright smiles for the rest of the spectacle as if to goad those displeased by his presence.

“Lock him up” is a male version of the far more famous “lock her up” rallying cry, frequently used by Trump to fire up crowds at his campaign events. The chant refers to the controversy surrounding former Democratic presidential candidate Hillary Clinton’s use of a private server for confidential and top-secret information when she was secretary of state.

The “lock him up” chant is not exactly a new version of tried and trusted “lock her up.” At last year’s Young Black Leadership Summit, Trump laughed and joined in the “lock him up” chant started by the crowd, calling for the imprisonment of Democratic megadonor and Trump’s fervent critic, George Soros.