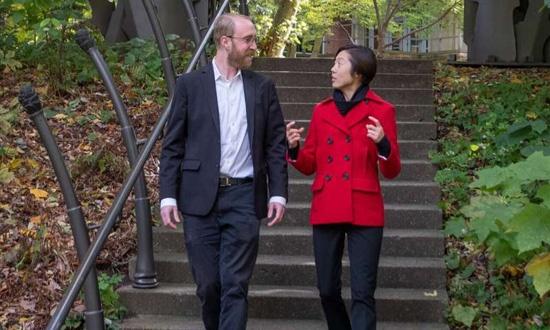 While the cancer applications hold the most possibility, their findings have potential beyond the field of oncology, said Richard, the Johansen Crosby Endowed Professor of chemical engineering and materials science.

“This work has the potential to transform fluorescent probes for broad societal impact through applications ranging from biomedicine to photocatalysis—the acceleration of chemical reactions with light,” he said. “Our solar research inspired this cancer project, and in turn, focusing on cancer cells has advanced our solar cell research; it’s been an amazing feedback loop.”

Prior to the Lunts’ combined effort, fluorescent dyes used for therapeutics and diagnostics, aka “theranostics,” had shortcomings, such as low brightness, high toxicity to cells, poor tissue penetration and unwanted side effects.

By optoelectronically tuning organic salt nanoparticles used as theranostics, the Lunts were able to control them in a range of cancer studies. Coaxing the nanoparticles into the nontoxic zone resulted in enhanced imaging, while pushing them into the phototoxic—or light-activated—range produced effective on-site tumor treatment.

The key was learning to control the electronics of their photoactive molecules independently from their optical properties and then making the leap to apply this understanding in a new way to a seemingly unrelated field.

Richard had recently discovered the ability to electronically tune these salts from his work in converting photovoltaics into solar glass. Sophia had long studied metabolic pathways unique to cancer cells. It was when the Lunts were discussing solar glass during a walk that they made the connection: Molecules active in the solar cells might also be used to more effectively target and kill cancer cells.

Their walks had rather unscientific beginnings. Shortly after the Lunts met at Princeton University, Richard moved to another university. To maintain their long-distance relationship, they scheduled daily phone calls. Upon their arrival at MSU, individual academic career demands replaced geographic distance as a challenge to their busy lives.

To connect daily, they take CEO-style walks together every evening. The two-mile saunters take place rain or shine, and they often engage in scientific discussions. The three keys to their walks are intentional curiosity, perseverance and the merging of different fields and perspectives, Sophia said.

“We talk science, strategic plans for our careers and our various grants,” she said. “We ping ideas off each other. Our continual conversations brainstorming ideas on a particular topic or challenge often lead to those exciting ‘aha’ moments.”

Their walks have helped them push through many challenges.

“Our first experiments did not turn out as expected; I’m surprised that we didn’t give up given how crazy the idea seemed at first,” Richard said. “Figuring out how to do this research took many walks.”

Obviously, the results were worth the hike. Today, Richard designs the molecules; Babak Borhan, MSU chemist, synthesizes and improves them; and Sophia tests their photoactive inventions in cancer cell lines and mouse models.

Future research will work to improve the theranostics’ effectiveness, decrease toxicity and reduce side effects. The Lunts have applied for a patent for their work, and they’re looking forward to eventually pushing their photoactive molecule findings through clinical trials.

“Though that will take many more walks,” Richard said with a smile.