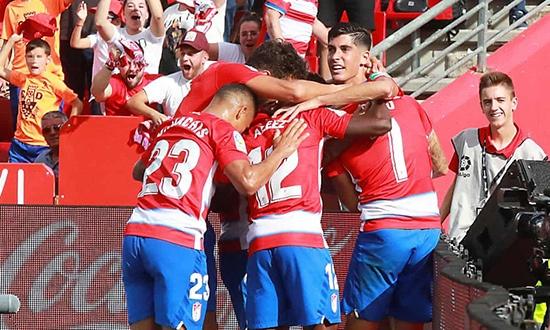 Granada continued a stunning start to the season by climbing above Barcelona to the top of La Liga on Sunday after beating Real Betis 1-0 for a fourth consecutive home win.

Former Betis forward Álvaro Vadillo struck the only goal of the game just after the hour mark, tucking the ball inside the near post with one touch to complete a quick counter-attack.

Granada top the standings on 20 points after 10 games, one clear of second-placed Barcelona who have a game in hand after the Clásico against Real Madrid, originally scheduled for Saturday, was postponed until December due to security concerns.
Betis struggled to create many chances and the closest they came to scoring was when Sergio Canales hit the bar from a free kick late on. They are 18th in the standings on nine points after a third defeat in four games.

Granada, who returned to the top flight after a two-year absence, now have the same number of points as they did for the entirety of the 2016-17 season, when they finished bottom.

Borussia Mönchengladbach scrambled to a 4-2 victory over Eintracht Frankfurt on Sunday to reclaim top spot in the Bundesliga and move a point clear of second-placed Bayern Munich.

Marcus Thuram tapped in a Breel Embolo cutback in the 28th minute and Oscar Wendt drilled in the Foals’ second goal on the stroke of halftime.

Frankfurt, however, sprung to life after the break. They cut the deficit through Danny da Costa on the hour and missed a string of golden chances to level.

Gladbach’s Nico Elvedi punished their wastefulness with a looping header in the 75th minute but Frankfurt were not yet done, bouncing back again with Martin Hinteregger’s glancing header. But they had no response after Denis Zacharia fired in from 16 metres from a fine Lars Stindl pass and Gladbach hung on to hand Frankfurt their first loss in the last five league games.

Marco Rose’s team shook off VfL Wolfsburg, who drew 0-0 with Augsburg earlier on Sunday, to move alone into top spot on 19 points.

Argentine striker Icardi and France forward Mbappe netted the goals in the opening half to put PSG on 27 points from 11 games, eight ahead of their nearest challengers Nantes, and leave OM in seventh place on 16 points.

Icardi has now scored seven goals in his last seven games while Mbappé has struck five times in two matches for PSG, who were without the injured Neymar.

AS Roma moved into fifth place in Serie A with a 2-1 win over Milan at the Stadio Olimpico on Sunday to continue the visitors’ crisis.

Edin Dzeko headed the hosts in front in the first half before Theo Hernandez drew Milan level after the break. Nicolo Zaniolo struck the winner after 59 minutes to send Roma above Cagliari into fifth on 16 points, one behind Napoli in the fourth and final Champions League spot.

Stefano Pioli has picked up one point from his first two games since succeeding the sacked Marco Giampaolo as Milan coach and his side are 12th with 10 points, having won just one of their last six games.

Ciro Immobile’s 89th-minute header gave Lazio a 2-1 win at Fiorentina to move the Roman club into sixth place, one point behind Roma.