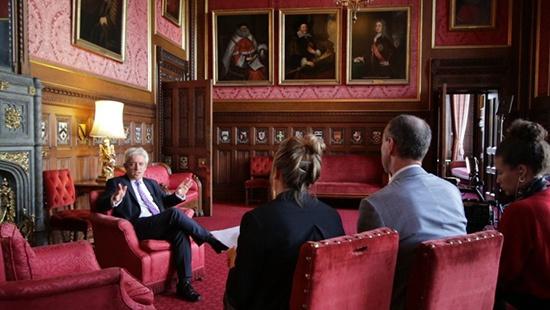 John Bercow, the speaker in the British House of Commons, has become an international star thanks to his humor and turns of phrase. In an interview with DER SPIEGEL shortly before he steps down, he spoke about Boris Johnson, death threats and the future of the United Kingdom.

DER SPIEGEL: Mr. Speaker, in your more than two decades in the House of Commons, have you ever experienced a more heated atmosphere than in the last weeks?

DER SPIEGEL: In your view, what is the main reason?

Bercow: I think it is partly because of the extreme gravity of the issue with which we’re dealing. And the outpouring of anger and personal hostility has partly resulted from sheer frustration with how long the whole Brexit debate has taken.

DER SPIEGEL: Three and half years and counting.

Bercow: It’s understandable that people might say, “Get it sorted.” But actually, it’s more important to get it right than to do it quickly.

DER SPIEGEL: Since Boris Johnson became prime minister, he and his ministers have been accusing parliament of sabotaging the Brexit process. Words like surrender, collaborators, traitors are being used. Is this a threat to democracy?

Bercow: No, I don’t think it is, as long as parliament has the backbone to stand up for itself. And I’m pleased to say that it has done so. Certainly, I myself have very explicitly stood up for parliament.

DER SPIEGEL: When the government tried to suspend parliament for five weeks in September, you protested unequivocally.

DER SPIEGEL: The London Metropolitan Police has recently said that there has been an unprecedented number of personal attacks against MPs. Do you think that is connected to the language used in the House of Commons?

Bercow: I’m not sure the connection is yet established nor if it can be established. But in recent weeks there have been some bad cases of intense anger and bilious remarks and venom and vitriol and vituperation. And I have tried to encourage colleagues to lower the temperature.

DER SPIEGEL: But it seems like the heated debate is stirring up members of the public. Social networks are flooded with anger and abuse.

DER SPIEGEL: What do you mean?

DER SPIEGEL: Have you received threats yourself?

Bercow: Yes, I’ve received several from time to time. They sometimes come in little waves, and they’ve always been reported to the police. People saying, “You won’t survive Christmas, we’ve got you in our crosshairs,” and this sort of thing. But to be honest, I have been more concerned about colleagues who don’t live in a protected environment, as I do here.

DER SPIEGEL: What’s happening to them?

Bercow: There are cases of members for whom additional protection has been required because they’ve received a very large number of death threats or death threats from a very credible source. In particular, there is definite evidence of forces threatening women and ethnic minorities. I know a number of black and other minority ethnic colleagues who’ve been threatened. A number of Jewish colleagues have also been threatened. This is an absolutely damnable state of affairs, which in my previous 22 years in parliament I hadn’t experienced.

DER SPIEGEL: Some people fear that the United Kingdom might be destroyed by the Brexit debate. Is that a fear you share?

Bercow: If Brexit goes ahead, which seems very likely to happen, will that be a challenge for us? Of course. But I don’t think we’re going to be destroyed. I think that this country has a great capacity to adjust, to reinvent itself, to find new paths to success.

DER SPIEGEL: Populism is getting stronger all over the world, also in Germany. Do you have any advice how to deal with it?

Bercow: Populism is borne of discontent with the established political order. And the particular thing that I dislike is the growth of angry populism that is designed to harangue and belabor and intimidate and threaten and sometimes even spur violence against democratic politicians or media. I suppose what I would say to parliamentarians all over the world is stand up for what you believe. Fight for your representative democracy. We do not have rule by plebiscite or rule by social networking sites or rule by decibel level.

DER SPIEGEL: You announced that you plan to step down at the end of the month, on October 31, the day the United Kingdom is theoretically meant to leave the EU. How would you describe your legacy?

Bercow: Well, it’s been the greatest professional privilege of my career. My mother once said to me, “You’ll never do another job that you enjoy as much.” And she’s probably right about that. But you don’t write your own legacy. So I will have to rest content with what other people make of my efforts. I suppose I’m quite a marmite character. I don’t know whether that’s a term familiar to a German audience, but marmite is an English spread which some people love and other people hate. Some people very strongly approve of me, and some people very strongly disapprove of me. I’m completely relaxed about that. I’ve been reelected more frequently than anyone else in the postwar period.

DER SPIEGEL: You are almost a pop star now in several European countries. People watch live footage of parliament as if it were a Netflix series.

Bercow: Well, I didn’t envisage that. I just happened to be the bloke in the chair at this tumultuous and historic time. When I stood for speaker in 2009, I obviously had no way of knowing what the chronology of events would be. There’s very considerable interest in our debates on Brexit across Europe, in America and parts of Asia, as opposed to when we debate British transport policy. But I hope I don’t let that go to my head. I always make the point I’m not important at all, other than I hope to my wife and children.

DER SPIEGEL: Do you regret anything you did or did not?

Bercow: I’ve had good days and bad days. Have I sometimes been irascible with somebody or treated somebody unfairly in the chamber inadvertently? Probably. Because you’re chairing day after day after day, and it’s not a science – it’s an art. If from time to time I have wronged somebody inadvertently, I obviously would regret that. But if you’re saying to me, do I have any fundamental regrets about the way I’ve gone about it, no.

DER SPIEGEL: What were your main goals?

Bercow: I was always clear that I wanted to be a facilitator of reform in the chamber, reform outside the chamber, and reform of the role of the speaker so that the speaker became an ambassador for parliament. Whether in the end people think the balance sheet of it is positive or negative is for them to judge. You can never please everybody. And I will have people saying, “Well done, John,” and other people saying, “Good riddance.”

DER SPIEGEL: You are resigning even though you are only 56 years old. What are your future plans?

Bercow: Well, I have been in place for a little over 10 years, and that’s quite a long time in this very high-profile and demanding role. I won’t simply stop work. I can’t do that. I’d like to do some writing and some speaking and some work, if the chance arises, in the field of corporate social responsibility and in the field of social mobility. And I’m completely potty about tennis and football. I always go to Arsenal home games with my son. Maybe I will get the chance to go to more Arsenal away games in the next few seasons.

DER SPIEGEL: Lately there has been a lot of talk about there being a caretaker prime minister if Boris Johnson loses a vote of confidence. And your name comes up quite often.

Bercow: That is extraordinarily unlikely. If the government fell, well, then there could be an election, but there wouldn’t automatically be a general election. If that happened, and I’m not expecting that now to happen, there could be an attempt to put together a kind of government of national unity. And I think probably the reason why my name featured a bit was that there wasn’t agreement about which party politician would lead that government of national unity. But I haven’t been approached about that. I am certainly not angling for it. I’m very much thinking in terms of leaving office with my last likely day in the chair the 31st of October.