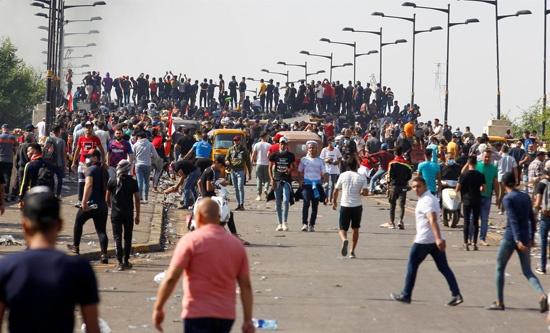 Falling short of a quorum, Iraq‘s Parliament failed to meet on Oct. 26 to discuss the demands of protests that have been rocking the country.

“Saturday’s [Oct. 26’s] session has been cancelled due to a lack of quorum,” said a parliamentary source.

The session was scheduled to discuss a raft of reforms demanded by protesters to fight corruption and create jobs.

Meanwhile, several hundred demonstrators gathered in central Baghdad on Oct. 26, brandishing Iraqi flags and calling Prime Minister Adel Abdul Mahdi a “worm” after a day of violent protests in which at least 40 people were killed.

Some 200 of the protesters had camped out overnight in the capital’s central Tahrir Square and were cleaning up the area. Others read verses from the Koran to mourn those killed.

Eight protesters were killed in Baghdad on Oct. 25, most of them after being struck by tear gas canisters launched by security forces trying to control the crowds.

Across the country, at least 40 protesters died, as demonstrators vented their frustration at political elites who they say have failed to improve their lives after years of conflict and economic hardship.

“The government has been stealing from us for 15 years. Saddam went and 1,000 Saddams have been hiding in the Green Zone,” a young protester, who declined to be named, said on Oct. 25, referring to the former Iraqi dictator.

The Green Zone is the central government zone of Baghdad that was closed to the Iraqi public for many years.

The Interior Ministry praised what it called the restraint shown by security forces on Oct. 25.

“The security forces secured the protection of demonstrations and protesters responsibly and with high restraint, by refraining from using firearms or excessive force against demonstrators,” the ministry said in a statement on Saturday.

In Iraq’s mainly Shi’ite southern provinces, which saw violence overnight as protesters clashed with Iranian-backed Shi’ite militias, the situation was calmer on Saturday, with a curfew still in place across most urban areas.

The latest bloodshed was the second major bout of violence this month. A series of clashes two weeks ago between protesters and security forces left 157 people dead and over 6,000 wounded.

More than 2,000 people were injured nationwide in those protests, according to medical sources and the Iraqi High Commission on Human Rights (IHCHR).