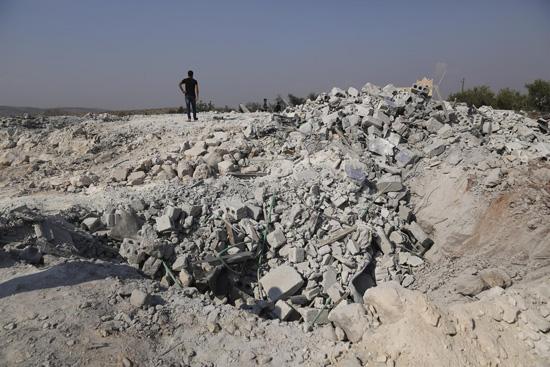 Back-to-back U.S. operations Saturday and Sunday have resulted in the deaths of Islamic State militant group (ISIS) leader Abu Bakr al-Baghdadi and spokesperson Abu al-Hassan al-Muhajir in Syria, but the organization has already designated a successor, Newsweek has learned.

Abdullah Qardash, sometimes spelled Kardesh and also known as Hajji Abdullah al-Afari, was said to have been nominated by Baghdadi in August to run the group’s “Muslim affairs” in a widely-circulated statement attributed to ISIS’ official Amaq news outlet, but never publicly endorsed by the group. Though little is known about the former Iraqi military officer who once served under late leader Saddam Hussein, one regional intelligence official asking not to be identified by name or nation told Newsweek that Qardash would have taken over Baghdadi’s role—though it had lost much of its significance by the time of his demise.

Baghdadi, who died after detonating a suicide vest following a Delta Team operation first reported by Newsweek, built ISIS’ self-styled caliphate out of Al-Qaeda’s Iraqi branch, but the official said that the influential hard-line cleric’s role had become largely symbolic.

“Baghdadi was a figurehead. He was not involved in operations or day-to-day,” the official told Newsweek. “All Baghdadi did was say yes or no—no planning.”

Details are still emerging as to what transpired at Baghdadi’s compound in Barisha village and why the ISIS chief was hiding out deep in territory more commonly associated with rival jihadi group Hayat Tahrir al-Sham, led by former Baghdadi associate Abu Mohammed al-Jolani, who went on to built Al-Qaeda’s Syria branch, Nusra Front. Both men’s forces, however, have faced consecutive defeats, severely limiting their freedom of movement across two nations they played key roles in destabilizing.

The pair had taken advantage of the unrest resulting from the 2003 U.S. invasion of Iraq that overthrew Hussein to establish a powerful militant network. Jolani ultimately refused to merge his Syrian group with Baghdadi’s as the latter spread there, capitalizing on a civil war that erupted in 2011 as the U.S., Turkey and other regional powers backed a rebel and jihadi uprising against Syrian President Bashar al-Assad.

As ISIS came to dominate both in Iraq and Syria, however, the U.S. gathered an international coalition in 2014 to begin bombing the group in both countries. Iran also mobilized its own forces, along with allied regional militias, to back the Iraqi and Syrian governments against militant advances.

By 2015, Russia entered the fight in Syria and the U.S. had gradually begun to ditch the increasingly Islamist opposition in favor of a third faction, the Kurdish-led Syrian Democratic Forces. The Syrian government and Syrian Democratic Forces then waged rival campaigns to defeat ISIS, but Baghdadi continued to elude local and international powers.

While President Donald Trump was the first world leader to explicitly claim the death of Baghdadi, various U.S. and international officials have offered conflicting reports as to his fate and whereabouts in recent years, many times placing him in the Jazeera region in northeastern Syria and eastern Iraq and claiming he had been left unable to lead ISIS due to wounds sustained in an airstrike.

When Baghdadi was seen in a video released in April—his first appearance since making his sole public speech at Mosul’s Grand al-Nuri Mosque—there were no visible signs of injury. Even with his demise, however, his group’s infamous capacity to both order and inspire global bloodshed may not be entirely degraded.

“They will hit Syria, the chaos of Iraq, Europe and definitely the United States,” the regional official told Newsweek. You have a hit a sleeping giant, it will wake up and cause unforeseeable chaos and wreak havoc on the Western civilians.”

One former U.S. intelligence official, however, argued that Baghdadi’s death may have some tangible effect on the group’s ability to operate, telling Newsweek that “if he is signing off on operations and strategy via letter and courier then he has an impact.”

“The leader matters,” the former official said. “Candidly, we go after senior leaders, because they make decisions.”

Trump has ordered the withdrawal of U.S. forces from northeastern Syria, leading the Syrian Democratic Forces to strike a deal with the Syrian government, whose ally Russia, has reached an agreement to halt a Turkish-led attack on Kurdish fighters near the border. The president has, however, deployed additional U.S. troops to secure oil fields in eastern Syria.

This story has been updated to reflect that the veracity of the Amaq report announcing Abdullah Qardash’s position has been disputed.

Tom O’Connor is a staff writer focusing on foreign conflicts and politics. Prior to joining Newsweek, he formerly reported for the International Business Times and the New York Post. You can follow him on twitter at @ShaolinTom

Naveed Jamali is a Newsweek columnist and a former FBI double agent. He is the author of “How to Catch a Russian Spy.” You can follow him on Twitter at @NaveedAJamali