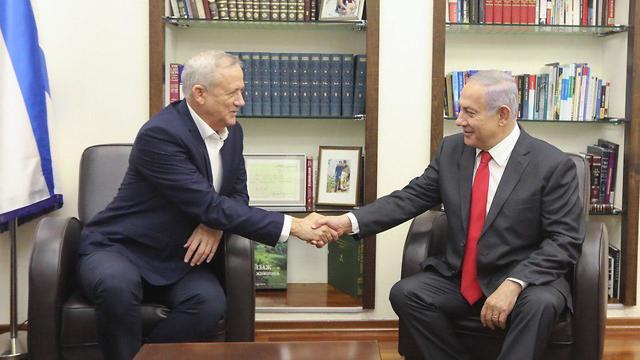 Netanyahu met in Tel Aviv Sunday to negotiate terms for the establishment of a unity government in a round of talks that did not lead to any new developments besides a promise to meet again for further negotiations.

“Prime Minister Benjamin Netanyahu and Blue and White leader MK Benny Gantz discussed the available political options during the meeting,” said a shared statement by both parties. “It was agreed that both parties’ negotiation teams will continue to be in contact”.

Gantz said after the meeting with Netanyahu that he will do everything in his power to prevent another round of elections.

Blue and White and Likud negotiation teams also met earlier Sunday in Ramat Gan to try and negotiate a solution for the political stalemate between the parties.

Blue and White’s negotiation team described the meeting as being “in good spirits”, adding that Likud’s team asked for further meetings in the next few days, centered around the understanding that since Gantz currently holds the mandate to form a government, he is the destined prime minister.

Blue and White officials cited Likud’s insistence on including the entire right-wing bloc, which features far right and ultra-Orthodox parties, in any possible unity government as one of the main points of disagreement between the two parties.

“Throughout the meeting, Likud kept on insisting that they represent the ‘immunity bloc’, the 55 MKs supporting Netanyahu’s immunity despite the criminal charges held against him and his possible indictment,” said the officials.

Likud then released a statement shifting the blame on Blue and White for refusing to accept a government outline proposed by President Reuven Rivlin last week.

“Blue and White refused the outline given by President Reuven Rivlin, which is the only path to a broad national unity government,” said the statement.

President Rivlin’s government outline states that Gantz and Netanyahu will receive the premiership on a basis of a rotation government.

Netanyahu will serve as prime minister first and Gantz will step in after two years or alternatively, in case Netanyahu is indicted in one of several corruption cases standing against him.