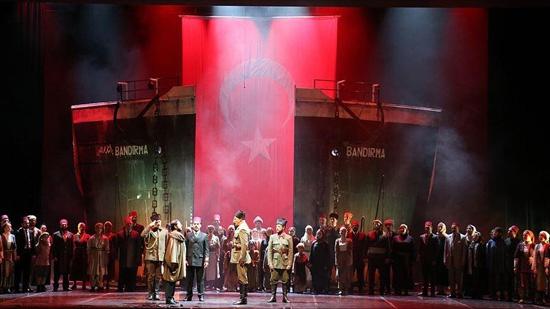 Samsun State Opera and Ballet (SAMDOB) will re-perform the “Yeniden Doğuş” (“Reborn” in English) opera in honor of the 96th anniversary of founding of the Turkish Republic on Oct. 29, 1923.

The opera commemorates Atatürk’s arrival in the Black Sea province of Samsun on May 19, 1919, to start the War of Independence.

Using arias, duets, chorus music and dances, the opera opens with the story of the people who were forced to migrate from Istanbul to Rumelia after the 1912-1913 Balkan War and depicts the historical events leading up to the proclamation of the Turkish Republic.

The opera follows the events of World War I, the Dardanelles Campaign, Istanbul during the years of occupation, the journey to Samsun on the Bandırma Ferry, the Amasya, Erzurum and Sivas congresses and the Great Offensive.

Nearly 130 artists will perform on stage in the opera.