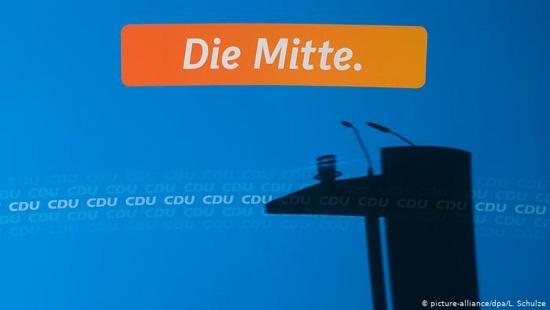 Sunday’s state elections in Thuringia were a great success for the far-left and far-right. Now it’s time for the centrist Christian Democrats to step up to the plate, says Kay-Alexander Scholz

What a mess. The Thuringian state elections are over and the parties on both extremes of the political spectrum won the biggest share votes. The Left Party, which succeeded the East German Communist Party, won the most votes — followed by the right-wing populist Alternative for Germany (AfD) in second place. The Thuringia branch of the AfD is particularly radical.

This outcome makes Thuringia, which has a population of just 2.1 million, Germany’s most politically polarized state. The run-up to Sunday’s vote left no doubt about this. And now, political adversary could escalate into outright conflict.

According to a recent youth survey, young people are now more concerned about the growing rift between people of different political standpoints than economic or social challenges. This should give us all cause for concern.

CDU is the only centrist party remaining

Thuringia’s more-or-less centrist parties have suffered major electoral defeats. The Social Democrats (SPD), Liberals (FDP) and Greens each took less than 10% of the vote. But the Christian Democrats (CDU), which also suffered tremendous losses, took more than 20% of the vote. This, at least, is a signal that there still remains a centrist base in the state. Overall, the result of Sunday’s election is therefore a stark warning – even though there is also glimmer of hope.

The CDU must now adopt the role of a societal mediator — regardless of how difficult the upcoming coalition talks and formation of a new government will be.

Much is at stake

The centrist virtues of balancing out and seeking compromise must make a comeback. This applies just as much to the Thuringian CDU as its does to the national-level CDU. Party leader Annegret Kramp-Karrenbauer should now fashion her CDU into a force that is willing to take on this responsibility.

But the party should certainly not add fuel to the fire in an ill-advised attempt to stand out. It will not help to ignore the Left Party and AfD, or, conversely, to lash out at either.

CDU must step up to the plate, again

The CDU has a tradition of stepping up the plate. The party supported the idea of a united Europe early on, and believed in German reunification when the country was still divided in two. Now, it must keep Germany from tearing apart from political polarization and try to keep the radicals in check.

It will achieve this best if it hones its own political profile and manages to appeal to more centrist voters. It could even take its cue from other European parties. A range of Christian Democratic parties across the continent have managed to win elections with distinctively liberal conservative platforms — among them recently the Austrian People’s Party.

The CDU’s election posters and events keep retraining the party’s desire to be at the center of Germany’s political spectrum. This was not a difficult thing to proclaim a while ago when so many other parties were edging toward the center as well. But now, with polarizing growing, the CDU needs to show that it can and wants to deliver on its centrist credo.

If this kind of polarization continues, it may also affect the national level. And this would make forming centrist governments increasingly challenging.