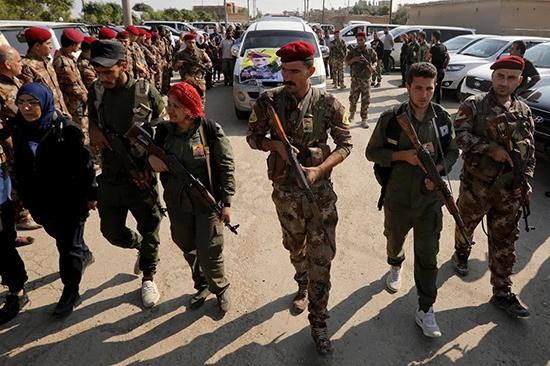 BEIRUT (Reuters) – The Kurdish-led Syrian Democratic Forces (SDF) said on Sunday it had agreed to withdraw more than 30 km (19 miles) from the Turkish border, an announcement welcomed by Damascus which said Turkey should now end its “aggression” in northeast Syria.

FILE PHOTO: Fighters of Syrian Democratic Forces (SDF) take part in the funeral procession of Kurdish fighters who were killed during clashes in the northeastern Syrian town of Ras al-Ain, in the town of Qamishli, Syria October 22, 2019. REUTERS/Muhammad Hamed

Turkish President Tayyip Erdogan and Russia’s Vladimir Putin then agreed on Oct. 22 that Syrian border guards and Russian military police would clear the border area up to 30 km into Syria of YPG fighters over a six-day period that ends Tuesday.

The YPG is the main component of the SDF and is viewed by Ankara as terrorists due to their links to Kurdish insurgents in southeast Turkey. But the SDF has been a key ally of the United States in the fight against Islamic State militants.

“The SDF is redeploying to new positions away from the Turkish-Syrian border across northeast Syria in accordance with the terms of the (Erdogan-Putin) agreement in order to stop the bloodshed and to protect the inhabitants of the region from Turkish attacks,” the SDF said in a statement.

It urged Russia to help ensure “a constructive dialogue” between the Kurdish-led administration in northeast Syria and the government of President Bashar al-Assad in Damascus.

Moscow is Assad’s closest ally and Russian military power has proven decisive in helping him turn the tide of Syria’s eight-year civil war and recover large swathes of territory.

The Sochi agreement allows Assad’s forces to return to parts of the northern border with Turkey for the first time in years.

The government will help citizens to re-integrate, SANA said, paving “the way for … a return to Syrian national unity”.

Under the Erdogan-Putin agreement, clinched in the Russian Black Sea resort of Sochi, Turkish and Russian forces will start patrolling from Tuesday a section of the Turkish-Syrian border that runs 10 km deep into Syria.

On Saturday Erdogan said Turkey would not hesitate to intervene again to clear YPG forces from the border area if Russia failed to fulfill its obligations under the Sochi deal.

SANA reported on Sunday clashes between the Syrian army and Turkish forces near to Ras al-Ain, a town in northern Syria on the Turkish border.

Turkey did not immediately confirm the clashes. Separately, the defense ministry in Ankara said one member of Turkey’s military had been killed and five others wounded in the Ras al-Ain area on Sunday after a YPG rocket and mortar attack.

The military was conducting reconnaissance work and responded in kind to the attack, the ministry said.

Additional reporting by Orhan Coskun in Ankara and Ezgi Erkoyun in Istanbul; Writing by Gareth Jones; Editing by David Evans

Turkey to stay in Afghanistan as long as Kabul wants: Minister