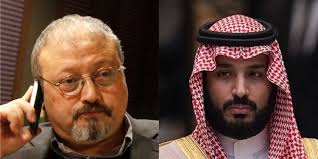 “I am disappointed that he (Antonio Guterres) has not taken the opportunity that I provided him with to move us a little bit further in the road towards accountability,” Agnes Callamard, a UN official, told Anadolu Agency at the UN headquarters.

A UN official on Sunday said that world body’s chief Antonio Guterres should have demanded an inquery.

Asserting that international scrutiny of the murder of slain journalist Jamal Khashoggi was “absolutely required”, a UN official on Sunday expressed disappointment that the world body’s Secretary-General Antonio Guterres did not demand a criminal investigation into the matter.

“I am disappointed that he (Antonio Guterres) has not taken the opportunity that I provided him with to move us a little bit further in the road towards accountability,” Agnes Callamard, the UN special rapporteur on extrajudicial, summary or arbitrary executions, told Anadolu Agency at the UN headquarters.

“The Secretary-General has not been very courageous, but … the rest of the international community has not been particularly courageous either on that particular issue. There has been a kind of coalition of the willing not to do anything,” she added.

Underlining that Turkey could have come forward with a formal request to Mr Guterres in the case, the official said, “It’s an international issue, not just a Turkey issue.”

She said that Khashoggi’s killing is not a domestic matter of crime.

“The killing of Khashoggi was the least domestic killing that I can think of,” Ms Callamard said, adding, “international scrutiny was absolutely required”.

In June, Ms Callamard had presented her special report on Khashoggi’s murder, in which she called for an international investigation into the murder, adding that the Saudi probe into the matter has failed to examine who may have ordered the killing.

The independent investigation released held Saudi Arabia responsible for the scribe’s “extrajudicial killing.” The report revealed that the late Saudi journalist was the victim of a “deliberate and  premeditated execution.”

Khashoggi, who was a journalist with The Washington Post and a vocal critic of the Saudi regime, was killed on October 2 last year at the Saudi Consulate in Istanbul where he had gone to obtain paperwork certifying his divorce from his former wife Alaa Nassif in order to marry his Turkish fiancee Hatice Cengiz.

After presenting several contradictory theories, Saudi Arabia acknowledged that Khashoggi was killed in the consulate premises in what it had described as a “rogue operation”.

According to US intelligence agencies, Khashoggi’s murder was enacted upon orders given by Crown Prince Mohammed bin Salman, an allegation denied by Saudi Arabia.