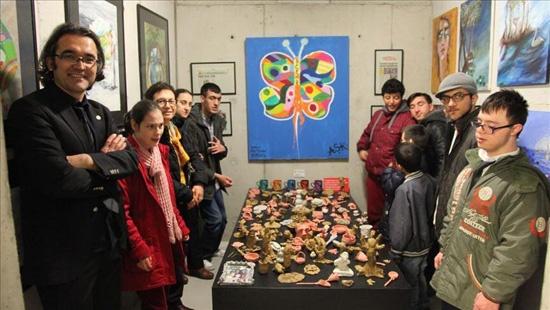 A Turkish art colony has boosted self-confidence of nearly 500 special children by encouraging them to socialize and perform arts in the last six years.

“We host 81 children with special needs and their teachers from different provinces to spend time with a group of 15 people, including artists and psychologists, once a year at the Doğa Park,” Hakan Korpi, general coordinator of Portakal Çiçeği International Plastic Arts Colony, told Anadolu Agency.

Korpi said the children have gained self-confidence by socializing and performing arts at the Doğa Park, located in Sapanca district of northwestern Sakarya city.

“Together with Ahmet Şahin, a businessman and owner of the art colony, we used to invite the families of children to the Doğa Park, but later we discovered that this would not be beneficial to the children,” he added.

Giving an example of a 22-year-old girl, he said she previously used to be fed by her mom and now she has started eating herself.

“We saw that girl near the open buffet. She chose her meals and ate them by herself because she has gained self-confidence,” he added.

Referring to a boy who previously preferred not to socialize and remained isolated, Korpi said the boy now performs a local Turkish halay dance by holding hands of other people.

“We feel like we achieved our goal,” he said, adding he was proud to be part of this “sacred job.”

“Our projects on children are the most important part of our art colony. We could divide those projects focusing on primary and secondary school students, and children with special needs,” Korpi added.

He said they receive more than 40,000 paintings for the contest they organize every year.

“We are against putting children in a race. All of the paintings we receive is ranked the first. We also do not specify any topic. Everyone should paint freely,” he added.

Underlining that they exhibit the works of children at fairs in Ankara and Istanbul, he said they gift all paintings to the visitors.

“Behind the paintings, there is an information card including the name, address and telephone number of the child who painted it. We asked visitors who have children to encourage them to send a painting to that child as a goodwill gesture,” he said, adding that the visitors would also contribute to the children’s expenses if they wish.

“We created art studios for artists in 20,000 square kilometers (7,722 square miles) of land to provide them with work environment. We have hosted nearly 1,000 artists there,” he said, adding that the artists came from 46 countries — including Germany, Italy, Kazakhstan, Malaysia and Macedonia.

He added that the artists both accommodate and perform their art there.

“We hold exhibitions in different provinces of Turkey to introduce the artists countrywide,” he added.

He said the colony exhibits at the Port Art Gallery in the capital Ankara all the artworks made at the Doğa Park.

“Founded in 2008, our art colony was the first that gathers artists and collectors,” he said, adding that the gallery will be turned into a museum soon.

In 2017, the gallery was awarded by the International Association of Art that cooperates with the UNESCO.

“The Republic Exhibition has become a tradition for us and it was first held in Berlin [in 2015]. This year, we will gather a total of 150 artists — including 50 masters, 50 seniors and 50 young people,” Korpi said.

“We will be at the Port Art Gallery [in Ankara] on Oct. 29 to celebrate Turkey’s 96th Republic Day with passion and to enjoy the power of art which was given by the republic,” he stressed.

He added that the exhibition offers wide range of art such as sculptures and paintings.

“We did not give any topic to the artists. We have just told them to show their own style marking the republic’s history,” he ad.