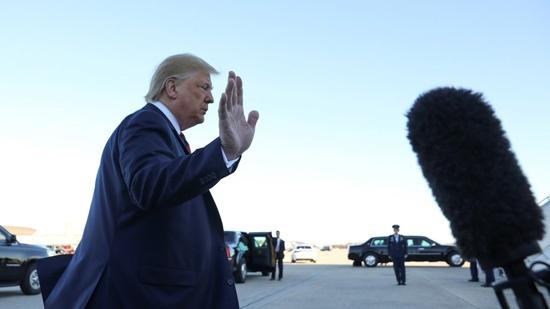 American media, celebrities and coastal elites are so far gone in their obsession with President Donald Trump, they are willing to praise Islamic State terrorists so long as they don’t have to side with their president.

Much of America greeted Trump’s announcement that US forces had tracked down and killed Islamic State (IS, formerly ISIS) “caliph” Abu Bakr Al-Baghdadi with joy and pride. What country would not rejoice in the demise of a leader of terrorists, head-choppers, rapists and murderers? Apparently, not the America of the mainstream media, Hollywood celebrities, and even many Washington, DC residents – all of whom simply could not resist to bash Trump instead.

The Washington Post has been rightly mocked for describing Baghdadi as an “austere religious scholar” in a headline, but their other stories spinning his death as anything but a win for Trump flew largely under the radar. That doesn’t mean other mainstream outlets covered themselves with glory. Apparently hating the very idea of giving Trump credit, they looked far and wide to find something, anything, they could hold against him.

One such thing was that he did not keep senior congressional Democrats in the loop about the operation. How dare he! They’re only trampling law and precedent in trying to impeach him on fabricated charges, no big deal.

Then there was this gem from National Public Radio, which chose to lead with Trump getting impeached and focused on “dramatic and incendiary language.” Oh, and by the way, Baghdadi died.

Objecting to Trump’s mannerisms over the substance of his actions has long been a thing with the mainstream media, but this time it led to some truly bizarre reactions. Just like the time when Democrats and the media sided with the notorious MS-13 gang, just because Trump called them “animals,” they now objected to Trump’s description of Baghdadi’s death because they read it as somehow offensive to dogs.

‘Halloween’ star Jamie Lee Curtis, for example, tweeted that “ALL living things suffer when they are blown up,” and that dogs are “brave, bold, loyal, loving and healing,” not that Trump would understand.

He may have died a coward @realDonaldTrump but ALL living things suffer when they are blown up. Anyone who has experienced warfare, unlike yourself, would know that. War is brutal. Dogs are brave, bold, loyal, loving and healing.

Trump’s “he died like a dog” may have gone right over the heads of American liberals, but it was perfectly clear in the Muslim world, for which it was intended. Islam considers dogs unclean, and describing Al-Baghdadi that way diminished any claim to religious legitimacy he made as an “austere scholar.”

Which brings us back around to the Post. Attempting to somehow excuse the headline, editor Kristine Kelly tweeted it “should have never read that way” – getting an epic ratio in the process from a public that just wasn’t buying it.

That’s because the Post reportedly got it right the first time – calling Al-Baghdadi the “Islamic State’s terrorist-in-chief” – and then inexplicably changed that headline to the controversial one, for reasons unknown.

Confused celebrities, Resistance activists and political reporters all work and live in areas that overwhelmingly voted against Trump in 2016. A great example is the crowd at the Nationals Stadium in Washington, DC – which that booed Trump when he made an appearance at Sunday’s World Series game.

The rest of America – the heartland Trump voters – saw a stadium filled with coastal liberals booing their president as he was doing the victory lap after killing Al-Baghdadi, and getting their karmic comeuppance when the Nats lost to the Houston Astros.

Sure, that had more to do with their star pitcher’s injury than with Trump, but this is America, where narrative trumps facts, every time. One would think the Trump-haters would have got that message by now. Appears not.