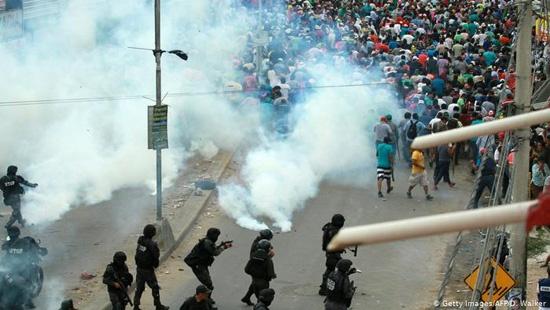 President Evo Morales eked out a win in the final presidential vote count, but his opponent Carlos Mesa has said the result is fraudulent. The two have blamed each other for the post-election violence.

The unrest came in the wake of a contested presidential election that was marred by irregularities and saw Morales claim victory over his opponent, former President Carlos Mesa.

In a final and legally binding vote count, the leftist leader tallied 47.08% of the vote to Mesa’s 36.51%, clearing the hurdle to avoid a runoff by just over half a percentage point.

Both Morales and Mesa claimed to have won the election and accused each other of inciting violence. Mesa alleged that electoral fraud was employed to enable the leftist president to attain the minimum 10-point lead required to avoid a runoff.

The former president pointed to a sudden and unexplained change in the electoral results. With 84% of votes counted after the polls closed, all signs had pointed to an election runoff. But after a 24-hour pause in vote counting, a sudden spike in Morales’ favor saw the incumbent pull ahead with a razor-thin win.

The Organization of American States (OAS) has expressed “surprise” and “concern” over the ballot count and has agreed to carry out an audit of the results, which UN Secretary-General Antonio Guterres said he “fully” backs.

Morales, who has been in power since 2006, has denied the charges of fraud, telling supporters at his rally that he lamented that “some groups do not recognize the triumph of the Bolivian people.”

“They aren’t the majority; they are small groups,” the long-serving president said.

On Sunday Morales claimed the opposition was preparing for a “coup d’etat.”

Residents in southern La Paz used branches, rubble and rope to close roads and block access to public transport, with some bus drivers trying to remove the barricades.

Fistfights broke out between rival groups, which then degenerated into battles with sticks and stones as police used tear gas to try to disperse them.

In the central city of Cochabamba, clashes broke out between opposition supporters setting up barricades and Morales’ loyalists.

In the eastern city of Santa Cruz, clashes left some 30 people wounded, one of them from a gunshot, government sources said. Local media also reported injuries in the city of Cochabamba.