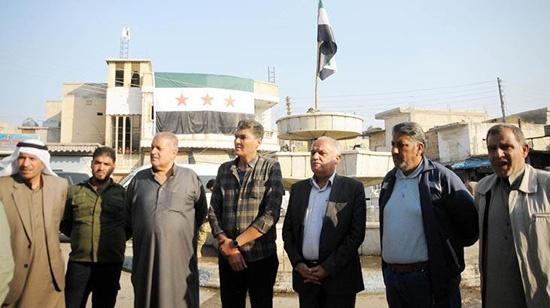 A local council was established on Oct. 27 in Syria‘s northern town of Tal Abyad, which Turkey recently cleared of YPG/PKK terrorists with its Operation Peace Spring.

Members of the local council were selected as daily life in the town returns to normalcy.

Abdurrahman Mustafa, who was also elected head of Syria’s interim government, said the 23-member council represents all ethnic and religious groups in the area. “We will make Tal Abyad an example and pilot city,” he said.

“Western countries would always say there was stability east of the Euphrates [River], which was dominated by terrorists. But we knew that their “stability” was coming from the power of guns,” he added. “We will rebuild the city democratically, and show this to the regime and the whole world.”

Mustafa stressed that Syrians desired to elect their own administration across Syria in a democratic way, as they did in Tal Abyad.

Abdullah Erin, governor of Turkey’s southeastern province Sanliurfa, said it was an important day for Tal Abyad, thanking the Turkish Armed Forces and Syrian National Army for their efforts. Erin added that Turkey would provide support to the people of Tal Abyad to make it a better place to live.

After Turkey’s Peace Spring Operation, which was launched on Oct. 9 to clear terrorists from the region, bakeries, grocery stores, barbershops, pharmacies and restaurants have opened and started meeting locals’ needs.

Tal Abyad is populated to a great extent by Arabs and was occupied by the terrorist group Daesh, also known as ISIS, in 2014. A year later, YPG/PKK terrorists occupied the city with the support of the U.S.

The terrorists forced Arabs and Turkmens, who live in the western part of the city, to move from the district with “a threat of air strike by regime forces”.

Tal Abyad was cleared of terrorists as part of Operation Peace Spring on Oct. 13.