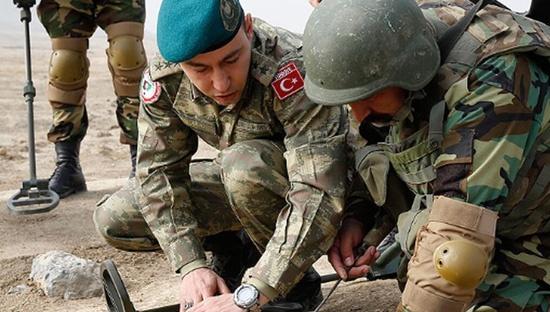 Turkey has always played a constructive and key role in NATO’s Afghanistan mission since 2003, the alliance’s senior representative to Kabul, Sir Nicholas Kay, said in an interview with Hürriyet Daily News at the NATO headquarters in Brussels.

Kay has served as the U.K. ambassador to Afghanistan from 2017-2018 before being appointed as NATO’s senior civilian representative to Afghanistan. Here is an excerpt of the interview:

How would you describe the current state of the NATO mission in Afghanistan?

As you know, we have been there as NATO since 2003, the official start of the mission. It has been 16 years. I think over these 16 years, NATO, thanks to countries like Turkey -who made and still make a great contribution to the mission, we can see that Afghanistan’s security forces are ever more capable then they were in 2003.

They were virtually nonexistent really. But now Afghanistan has special forces, air force commanders, police capable of delivering quite good security. We saw it in the elections. The Afghan security forces secured the presidential elections on Sept. 28, despite challenges from Taliban threats and actual attempts to disrupt the elections went ahead. Very challenging, very complex operation. And Afghan security forces did that.

I’m focusing on the Afghan security forces because that is the mission for NATO. We train, advise and assist the Afghan security forces. The rest is the progress of the country [that] you can see in terms of education, access to education for girls, high-level education – universities across the country full you can see. A lot of infrastructure development now: roads, water, electricity have all improved over the last 20 years. So, there is plenty of other progress, but the NATO contribution is on the security.

NATO allies should renew their commitment

What is your expectation from the allied countries regarding Afghanistan? What kind of assistance do you think they need to provide?

I think what we’re looking for is for NATO defense ministers and the partners of the Resolute Support mission to renew their commitment. Now there is quite a lot of uncertainty in Afghanistan. The election process is ongoing; we do not have a final result of that yet. We have the U.S.-Taliban talks process that’s suspended, and we don’t know whether that’s going to resume or not resume.

So, amid that uncertainty, I think for the alliance, we should just focus on our mission: training, advising and assisting the Afghan security forces, maintain our troop levels, maintain our funding for the sustainment of the forces. And now it’s not the time we need to make any decisions about a change of posture or change of mission.

But we need to be ready as conditions change, if they change. Then, NATO will also have to be ready to adapt to the changed conditions. NATO does not want to be there forever, but at the same time, we’re not in a rush to leave. We will leave when the conditions are right.

How do you think the U.S. intention to reduce the number of troops in Afghanistan will affect the ongoing NATO missions?

What we all knew and understood and had been thoroughly discussed and consulted with NATO was that if the U.S. reached an agreement with the Taliban in the first phase, they would commit to a small reduction of their troops and military presence.

And NATO, I think, would have felt it right to do a similar reduction as the Americans to build the confidence in the peace process and build the momentum towards a final peace process between the government of Afghanistan and Afghans. Not between foreigners and the Taliban but between the Taliban and the government of Afghanistan.

So, I think that remains the case. We hope that the peace process will resume and be successful. And if that’s the case, then the conditions change, and NATO is ready to change its presence in the country. But you know, let’s face it, these peace processes are long processes as well.

What the U.S. and the Taliban were discussing was not the full peace process. The full peace process happens when the Taliban sits with the government of Afghanistan and other Afghan representatives and discusses and agrees on the future for their country. Now, the negotiation between Afghans hasn’t started, and when it does start, it’s likely to take a long time. During that time, I think it’s very important that NATO remains committed and present within Afghanistan to support the Afghan security forces during that negotiation process.

We are hearing a lot of reports suggesting that the ISIL is in efforts to create a new base in Afghanistan and spread their terrorism to the rest of the world from there?

You’re right, we have to take very seriously the presence of ISIL within Afghanistan. I think it is another reason why we need to encourage Afghans to accelerate their peace process between the Taliban and the government of Afghanistan so that collectively Afghans can confront and deal with the threat of ISIL because, at the moment, ISIL is benefiting from the insecurity and conflict between the Taliban and the government.

Heart of Asia process in progress

On Turkey’s role in the mission, Turkey is one of the countries that was in the field from the first day. In general, how would you describe Turkey’s role?

Turkey’s role is very, very key indeed. It provides the training, advice and assistance command for the capital, for Kabul. So, therefore, it has a great role in helping the Afghan security forces secure Kabul, allowing the whole of the international community to operate, including such important facilities as the international airport in Kabul. So, their military training, advice and assistance presence is extremely key. But, beyond that, Turkey has always played a constructive role as a regional player.

So, it’s been very, very supportive of the Heart of Asia Istanbul process that tries to build a regional consensus, Afghan owned, but regional support for peace. On many fronts and of course, on the development front as well, the TİKA is also an important development partner.